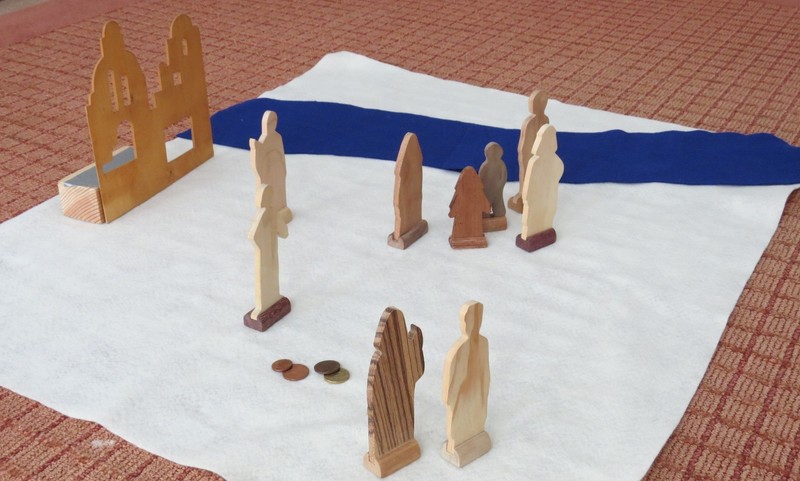 This story takes place in the land of Samaria.

When Jesus’ followers received the gift of the Holy Spirit, they were filled with love and power. They could do and say the things that Jesus said and did. Peter and John did this first in Jerusalem, and Philip went to Samaria. Crowds of people came to listen to Philip teach about Jesus Christ and the Kingdom of God. Some had unclean spirits. Some were paralyzed. Some were lame.

Now as Philip was teaching about the Kingdom of God, unclean spirits started screaming and coming out of many people.  The paralyzed began to walk. The lame were healed. Everyone was joyful.

Now there was a man in this place who did magic. His name was Simon. The people called him the “Great Power” and they followed him because he could do magic.

As Philip was telling them about Jesus and the Kingdom of God, they began saying, “We want to follow Jesus.”   So Philip baptized them. Even Simon the magician believed and was baptized.  The people were baptized, but they had not received the Holy Spirit. So Peter and John came from Jerusalem.  Peter and John began praying, and then they laid their hands on the people. And the people received the Hoy Spirit.

Now when Simon saw that the Holy Spirit was given through the laying on of Peter’s and John’s hands. Simon took some money and said, “Sell me this power so I can give the Holy Spirit.” Peter became angry and scolded him. “Simon, you cannot buy the Holy Spirit. The Holy Spirit is a gift. It is not magic power.”

“The Holy Spirit is a gift from God.”

This Sunday is the Third Sunday after Pentecost, and the color is green.

There is very little known about Philip, this follower of Jesus. But Stories tell us that Jesus’ disciples travelled everywhere to tell people about Jesus, the Kingdom of God, and the Holy Spirit.