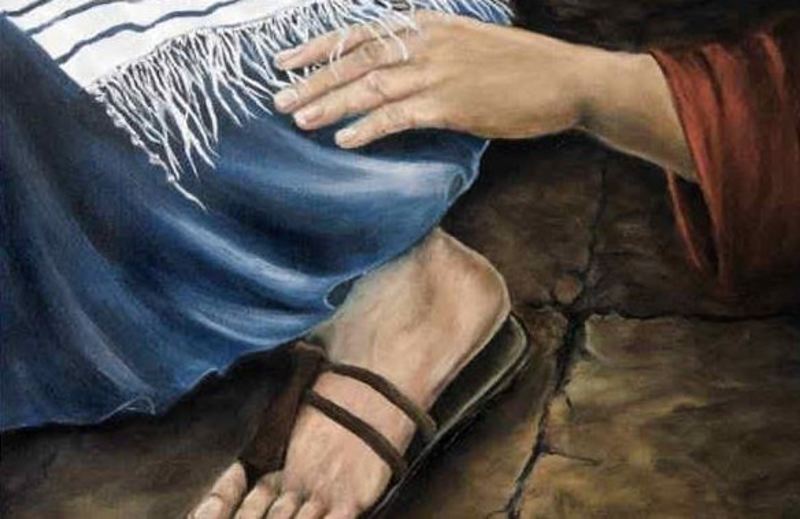 The story helpfully reminds us that God can--and does--act in a myriad ways within the world and our lives. God comes to us in the form--and incarnation--of the other. At times, we may glimpse the hand of God at work in the world around us. At other times, we may not recognize what the divine is up to. Regardless of our ability to glimpse God at work, we should remember that placing requirements on how God should act in the world or how we want God to act in the world may be nothing short of a fool’s errand. Yet, particularly when it comes to situations where we are in need, our backs are against the wall, especially when we need healing, it is natural to mirror the action of the drowning man. We may bargain with God. “Help me through this, and I will do better, be better,” we may say. We may spell out exactly what needs to be cured, and the preferred timeline. We may even demand some type of sign as a way to understand God’s presence to us and for us. And, if all these efforts are met with silence and seemingly no action, we may be like the drowning man: I had faith in you, but you did not save me!

Doubtless, It is in those moments that we would love the clarity of the healing that took place in today’s gospel. According to the writer of Mark, “they laid the sick in the marketplaces, and begged him that they might touch even the fringe of his cloak; and all who touched it were healed.” Instantaneous. Transformative. Unmistakable. Healing! Indeed, the desire for such clarity and restoration runs so deep for so many that there are any number of groups out there who are happy to prescribe exactly what you need to say, how you need to pray, what you need to believe, and how you need to act so that you can be cured. There are even more out there who are so cynical about the potential for any such healing that they have written off the presence of God a long time ago.

So, what are we left to do? Perhaps we might engage today’s story focused less on the healing that takes place and more on the context in which the healing occurs and the presence of the divine confirmed there. Indeed, instantaneous healing is a mystery in life, and we are generally talking about what we do not know. Rather than try and fit the square peg of divine intervention into the round hole of complex reality, maybe focusing on the other elements of the story will produce more light than heat.

On the one hand, this story of Jesus and his compassion for all who came to him is the fulfillment of what the prophet Jeremiah prophecies in the first lesson. Jeremiah speaks for God, “I will raise up shepherds over them who will shepherd them, and they shall not fear any longer, or be dismayed, nor shall any be missing, says the Lord. The days are surely coming, says the Lord, when I will raise up for David a righteous Branch, and he shall reign as king and deal wisely, and shall execute justice and righteousness in the land.” Jesus certainly fits the bill of this shepherd, this righteous Branch. He exists as the antithesis of the corrupt leaders who led the sheep astray in Jeremiah’s day. For those following Jesus in the first century and down through time, this motif is essential to our worldview.

Furthermore, one of the amazing things about the healings is that no one is deemed worthy or notably singled out for healing. Jesus simply walks about, and all those who touch the fringe of his clothes are made whole. This may seem a small point. However, it is important. To begin with, there exists no recipe for healing. No incantations, no set of prayers, no list of beliefs, and no actions. The healing simply happens. It is not that saying things, praying, faith, or action are bad; it is that we are not the subjects of our own healing. We are the beneficiaries of grace in those moments, much like those who surrounded Jesus. I mentioned in Friday’s note the podcast with Ross Douthat and Heidi Schlumpf on the Communion Wars with Joe Biden. In it they highlight one of the realities of communion. Schlumpf noted, “that sacraments are ways that we receive grace. And grace is unearned, so not this prize for the perfect, as Pope Francis has said.” Grace is unearned. There is no prize for the perfect.

Which moves us to a fascinating place in considering the context of Jesus’ healing in Mark’s gospel. Namely, the idea of the prize for the perfect. Or, to put a much finer point on it, the imperfect in today’s text. In the first century, all those who were sick were considered sinners. They, literally, had done something to bring about the malady from which they suffered. Thus, if anyone was worthy of healing, they were not. Which underscores the radical nature of Jesus’ healing and, by extension, God’s grace extended to the whole of creation. Religion, in this context, is not about perfection. It is about grace. And we all need it.

Yet, we live in a culture that possesses a fixation on perfection and is only too happy to point out who are the winners and losers, who are the more perfect and less perfect, who are desirable and who are not. In thinking about this, I was reminded of a philosophical debate on Buddhism. Basically, can a Western person truly practice Buddhism? The question arises because of the difference between Western and Eastern cultures. Someone raised in Nepal or India or Southeast Asia, marinates in an entirely different cultural milieu, where the concepts of Buddhism permeate so much of life. On the other hand, someone raised in Europe or the United States experiences very different cultural influences. Of course, someone from the West can practice Buddhism. However, there are certainly distinctions between East and West.

This struck me when thinking about Christianity and the context of Jesus day. Perhaps, we should ask a similar question. Can a 21st century, culturally dominant, post-modern, world power practice Christianity? I don’t mean to be trite. Of course we can practice. Yet, we should not lose sight of how different the Christianity that grew up around Jesus is from the one that we practice in our cultural context. Jesus crosses boundaries to heal those who are outcast. Jesus welcomes those on the margins. Indeed, so much of Jesus’ ministry is concerned about everyone else but those who are in power and control. Yet, we live in what is often described as a Judeo-Christian culture. Far from the margins, our Christianity is at the center of power. Or, at least, it had been until relatively recently. Thus, we use images of power and might to talk about Jesus and God. The second coming, for instance, is a cosmic battle. Yet, the story of Jesus is deeply rooted in a context of compassion and grace for those who have been pushed aside by society. The book the Sacred Ground group is reading, Howard Thurman’s Jesus and the Disinherited, makes this point. The world of Jesus is so radically different from the world we occupy. Not because of technology or progress or time. Rather, the focus of what Jesus was concerned about is not necessarily the focus that the Church has today. Recognizing this and wrestling with it is important. Indeed, if we ignore this, we may be like the drowning man. Waiting for God to act, when God is acting all along, but we are too blind to see or participate.