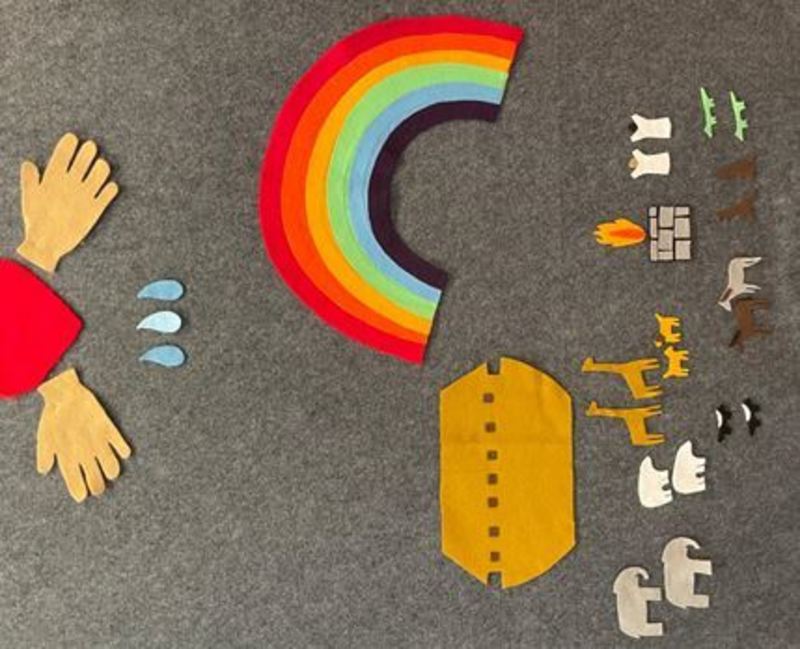 Do you remember how God made the world   and gave it to the man and the woman   to love it and tend it and care for it?

They lied and cheated and stole from each other   and fought and hurt and killed each other,   and worshipped strange and ugly gods.

And when God saw all the evil things   that they were doing in the world,   God decided to wash the world clean   and start over again.

But there was one man who heard God’s voice.

And God said to Noah,   “Build an ark, and go into it,   with all your family and all your animals,   because I am going to wash the world clean   with a great flood.

And Noah did as God had said.

He built the ark and went into it   with his family,   and all the animals … two by two   the elephants and the kangaroos   the lions and the horses…

And Noah shut the door of the ark,   and it began to rain.

It rained for forty days and forty nights,   till everything was covered with water,   and the ark floated on top of the water   with Noah and his family and all the animals   safe inside.

Then after forty days and forty nights  the rain stopped.

And the ark came to rest on a mountaintop   which was under the water,   and Noah opened the ark   to see if there was any dry land anywhere.

And Noah waited and opened the ark a third time,   and sent out the bird, and the bird thew around and around and this time it did not come back.

Then Noah knew that the waters had dried up.

So Noah opened the doors of the ark   and Noah’s family and all the animals came out of the ark.

And God sent a rainbow, as a sign of a promise:

That never again would God destroy all living things with a flood.

“As long as the earth endures, there will be summer and winter, day and night, seedtime and harvest, sunshine and rain.”   Noah and his family promised to be God’s people   and God promised to be their God.

And Noah built an alter and worshipped the Lord.   And that is our story.

This Sunday is Pentecost Eighteen and the color is green. While it is still the long green growing season of the Church year, this week autumn starts. I am sending a little poem about autumn   The leaves are yellow, red, and brown,

A shower sprinkles softly down;

The air is fragrant, crisp, and cool,   And once again I’m stuck in school.   The story of Noah is a new beginning just as the start of school is a new beginning   Have a good week. Be safe.   I miss you!   I want to thank Gretchen Wolff Pritchard for her wonderful Beulah Land stories.

The Good Shepherd and the Wolf

The Shepherd and His Flock