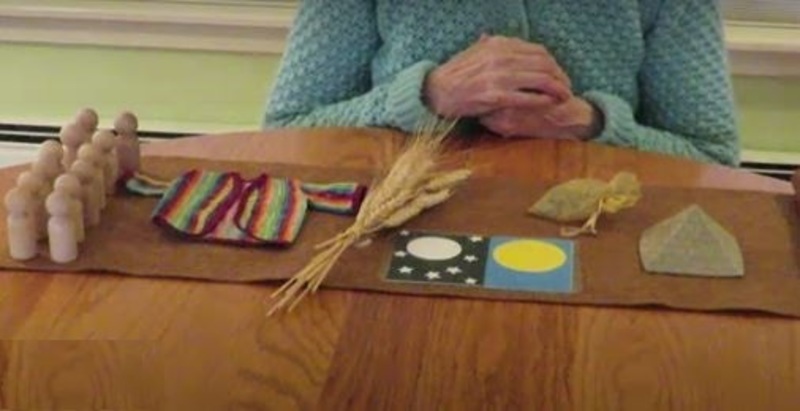 Joseph was in jail. He was alone, but God was with him.

Then one day, Pharaoh, the King of Egypt said to his servant, “I had a dream last night, and I don’t know what it means.” The servant remembered Joseph, and he said to Pharoah, “I know someone who can explain your dream.”

Joseph said, “The meaning of dreams is in listening to God. God has told me what this means. There will be seven good years with plenty to eat. Then seven bad years, with no crops and no food. But if you start now, and save food from the good years, God will give you enough and more than enough.”

So Pharoah made Joseph his head steward. He put him in charge of the whole land of Egypt, to buy food all through the seven good years and save it for the bad years to come.

All through the seven good years Joseph collected the grain from the farmers’ fields and saved it up.

Then, when the times turned bad, there would be enough and more than enough.

But in Egypt, there was food, and Joseph handed out the food to all the people of Egypt. He was the most powerful person in the land. The only one who had more power was Pharaoh.

Far away, in the land of Canaan, times turned bad too. The people of Canaan came down to Egypt to buy food.

Joseph’s brothers came down to Egypt to buy food and they stood in front of their brother, Joseph, and bowed down to him, because he was the most powerful person in the land. He sold them the food they needed, he recognized them, but they did not know who he was.

Twice they came to Egypt to buy food. They bowed down before him. Just as Joseph had seen in his dream, long ago in the land of Canaan. He did not tell them who he was.

But the third time, as they bowed down to him, he could not keep his secret any longer. He said to them, “I am Joseph, your brother. Is my father still alive?”

When they saw it was Joseph, they were afraid, because of what they had done to him.

He told them, “Don’t be afraid; you see how God has brought good out of evil. God has brought me here to save life. Here in the land of Egypt there is enough and more than enough. Now go back and bring our father and come and live in Egypt.

So, Joseph’s brothers brought their father, Jacob, to the land of Egypt. They came with their wives and children and all that they had. And they lived in Egypt in peace and plenty.

This is how the People of the Promise came to live in Egypt. And that is our story.

This Sunday is Pentecost Twenty-three and the color is green. We are still in the long green growing season.   This story leads into the story about Moses. But this summer we read and heard about Moses leading God’s People through the water of the Red Sea to freedom. So next week I will skip that story and continue with another story about how God is always with his People.   Have a good week. Be safe.   I miss you!   I want to thank Gretchen Wolff Pritchard for her wonderful Beulah Land stories and felt designs.