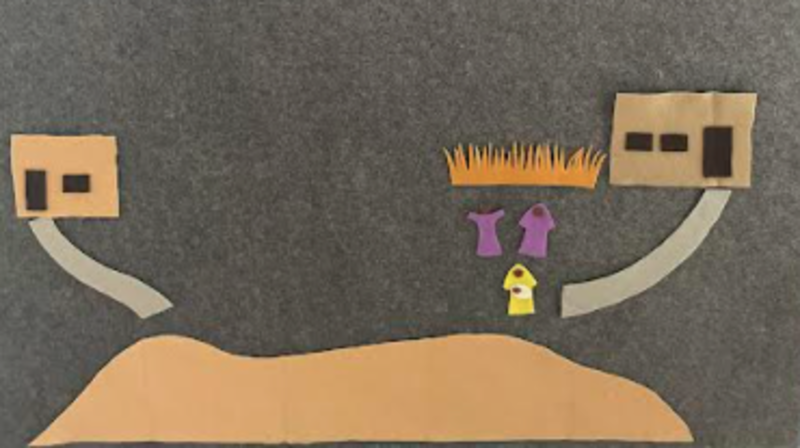 This Sunday is Pentecost Twenty-four and the color is green.

There a just a few more Sundays in Pentecost and then the color and the Season will change. It will be Advent, a time of getting ready.   I like story, because when the People of God need help God is with them. God is always there when the travel and he brings them safely home.   Have a good week. Be safe.   I miss you!   I want to thank Gretchen Wolff Pritchard for her wonderful Beulah Land stories and felt designs.

God chose Moses to lead his people out of Egypt, through the desert back to the land of Canaan. This is the land that God had promised to Abraham.

Canaan was a land flowing with milk and honey. There they had everything they needed, grain and oil, fields and orchards, towns and villages, fortresses and walled cities. And the people spread out and took the land as their own.

There were good years and bad years, times of trouble and times of peace, times of plenty and times of hunger.   In those days, there was a man named Elimelech, who lived in Bethlehem. His wife was named Naomi, and they had two sons.

There came a bad year when there was no food, so they left Bethlehem to find food. They did not go to Egypt, they went to the land of Moab and settled there.   The two sons grew up and married, the older son married Orpah, and the younger son married Ruth.   Elimelech died and his two sons died also.

Naomi was left a widow and Orpah and Ruth were widows too.   Now Naomi heard that the Lord had blessed the land of Canaan and made it fruitful again. So Naomi set out to return home.

She said to her daughters-in-law, “Do not come with me; stay here in your own land and make yourselves new lives. Since my sons are dead, I have nothing left and you owe me nothing.”   Orpah went back to her parents, home. But Ruth did not leave Naomi, “Do not try to change my mind,” she said: “I will stay with you. Where you go, I will go, and where you stay, I will stay.   Your people shall be my people, and your God my God.”

Ruth and Naomi traveled together, and Ruth cared for Naomi. They went back to the land of Canaan, and they lived with Naomi’s family. But Ruth, from the land of Moab, was an outsider.

Ruth went to the fields with workers who were harvesting the grain, and as required by God’s law they left part of the grain for her, because she and Naomi had nothing. Ruth took the grain to Naomi, and they ground it into flour and made bread, so they had enough and more than enough.

The fields belonged to a man named Boaz. He saw how Ruth was good to her mother-in-law, and how hard she worked.

In time Ruth and Boaz were married and they had children, God gave them a son. They named him Obed, and Obed was the father of Jesse, and Jesse was the father of David, the shepherd boy who became a great king.   And that’s our story.