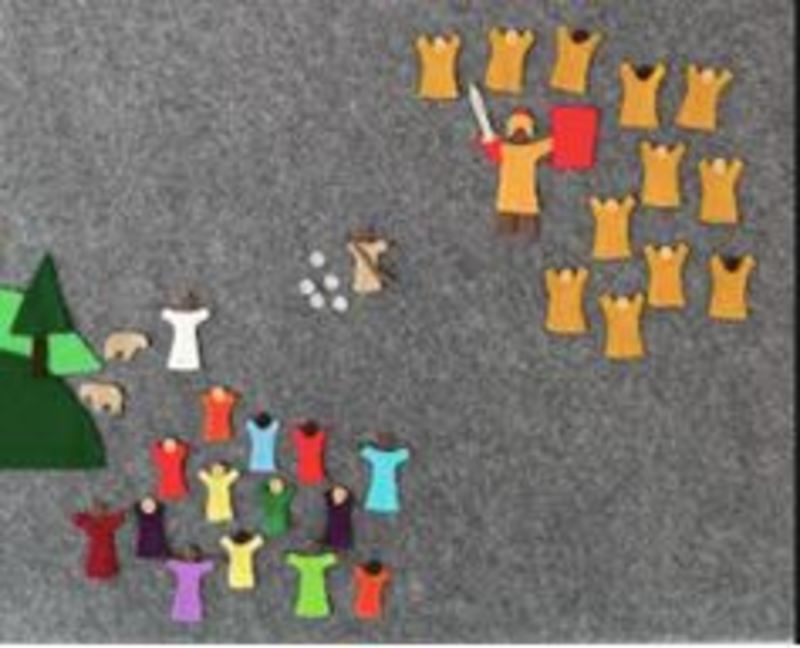 This Sunday is Pentecost Twenty-five and it is our last green Sunday. Next Sunday is Christ the King Sunday and the color is white. And then everything will change to blue for Advent. Advent is the time to get ready for the Mystery of Christmas.

Have a good week. Be safe. I miss you! I want to thank Gretchen Wolff Pritchard for her wonderful Beulah Land stories and felt designs.

The people of Israel had no king. Samuel, the prophet, was their leader. As Samuel grew old, the people came to him and said, “We need a king.” So Samuel prayed to God, and he chose Saul, a strong fighter, and he marked his forehead with holy oil, and crowned him the king of Israel.   And the war went on and on between the Israelites and the Philistines.

The Philistines had a leader, a giant whose name was Goliath.

The giant stood in the middle of the Philistine army, and called out to the army of Israel,

‘WHO DARES TO FIGHT ME?

IF ANY OF YOU CAN FIGHT ME AND BEAT ME,

THEN YOU WILL WIN THE WAR!

WHO DARES TO FIGHT ME?   I WILL CHOP HIM UP AND FEED HIM TO THE DOGS!”

But none of the Israelites dared to fight the giant.   Now there was a man named Jesse (he was the grandson of Ruth and Boaz), and Jesse ha eight sons. The older ones were all fighters in the army of Israel, but the youngest, David was a shepherd boy. No one thought he was old enough to fight.   Jesse sent David to bring food to his brothers in the army, and David heard the giant, Goliath, shouting.

“WHO DARES TO FIGHT ME?”

Not one soldier in the Israelite army answered him.

David said to his brothers, “Why is no one answering him?”   His brothers said, “Can’t you see? How big he is! How could anyone fight him and win?” But David said, “Who does the giant think he is, making fun of the armies of Israel, the people of God? God has shown me how to fight bears and lions when they came after my sheep, God will help me fight this giant.”

David went to King Saul and offered to fight the giant. King Saul said, ‘You are too young and too little.” But David said, “God has shown me how to fight bears and lions when they came after my sheep, God will help me fight this giant.”

So the King said to David, “Go and the Lord be with you.”

King Saul gave David his armor, but it was too heavy, and David would not wear it. He took his sling, and five smooth stones from the stream and set off to fight the giant, Goliath. The giant stood there in all his armor. He laughed in David’s face.

“WHO IS THIS LITTLE MIDGET?

I WILL CHOP HIM UP AND FEED HIM TO THE DOGS!”

But David said to him, “You come at me with a sword and spear, but I come at you in the name of the living God.”   David took a stone and put it in his sling; he whirled it round and round, and let it fly, and it hit Goliath in the forehead, and he fell like a tree.

David seized the giant’s sword and cut off his head. When the Philistines saw that their champion was dead, they ran away.   But the Isaelites saw how David was brave and strong and how he trusted God. They made David their leader.   David became King after King Saul.   And that’s our story.