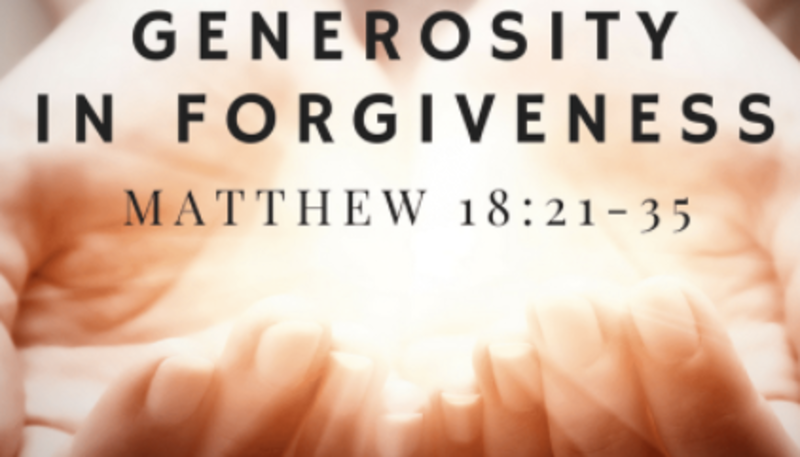 The old saying goes, “Trick me once, shame on you. Trick me twice, shame on me.” Thus, you can see that by most measures, Peter’s offering in today’s gospel to forgive someone in the church who has wronged him seven times is amazingly generous and, perhaps, just a little crazy. In essence the old adage on being tricked is that you will forgive it one time--shame on you--but you will never allow it to happen again--shame on me. Thus, we live in a world that is rationally averse to being taken advantage of or cheated or lied to or manipulated. All things that, ultimately, need to be forgiven. And as much as falling victim to those things turns our stomach, giving someone chance after chance after chance after chance after chance after chance after chance would drive us crazy.   It is important to note that Peter places forgiveness in the context of community. How often do I forgive another member of the community? Thus, this teaching is geared to ordering how we engage in our life together. Nevertheless, forgiving seven times is extremely magnanimous. Again, some might call it crazy. So, when Jesus counsels Peter, the other disciples, and us that seven times is not really the number of times that you should forgive another person but 77 times, you might sense the disbelief on the part of the disciples. You might possess a bit of scepticism yourself. Really? 77 times? How is that done? What does that look like? It’s impossible. And it is not healthy. If we forgive that much, people will simply walk all over us. Hence, you can think of any number of reasons why Jesus’ admonition is crazy. Doubtless, this teaching by Jesus is extremely hard.   And forgiveness is hard. Hard for us to ask for it. Harder still for us to give it. Our instincts are not necessarily to reach out, not to let go, not to clean the slate. Rather, there often exists a perverse pleasure in holding onto our grievances with another and milking the resentment and anger for all that we can. Yet, when we stop and think about it, we realize how ​not ​forgiving someone keeps us imprisoned with these toxic feelings, seething about how we were mistreated or taken advantage of or maligned, and wanting the other to pay. Yet, forgiveness is not about settling scores. Forgiveness is about freedom. If we don’t forgive, we become victims over and over again. Hence, forgiveness isn’t something that only restores and frees the one forgiven. Forgiveness also, and perhaps even more importantly, restores and frees the one who forgives.   Meanwhile, as David Lose notes, “Parables try to capture in narrative form something of what God is like and something of what God desires both for us and from us. Parables try to grab our attention, surprise us by grace, and jolt us to embrace the life God offers us that we might offer the same to others.” Well, the parable that Jesus offers should grab our attention and surprise us. We may not recognize it at first glance, but the scale of forgiveness within the parable and the level of obtuseness on the part of the first slave is astonishing.   Indeed, the parable that Jesus offers is not just about the disparity in what is forgiven by the king and what the slave demands of his fellow slave, but the obliviousness of the first slave to the grace shown him and the possibility that he might offer the same to his debtor. To begin, the discrepancy between the two debts is mind-boggling. The second slave owed the first slave a hundred denarii. That would work out to about four months wages in the first century. The first slave owed the king 10,000 talents, with 6,000 denarii--or 20 years of labor--adding up to one talent. Thus, the first slave would need to work 200,000 YEARS to work off his debt!   Philip Massey, an adjunct faculty member for Crowell School of Business, calculated the debts in modern terms. ​If 100 denarii equaled four months’ salary, at current minimum wage, it would be equivalent to $11,733.33.   Earning $35,200 per year at minimum wage, how much would you earn in 200,000 years to equal 10,000 talents? 7.04 billion dollars. Thus, the king’s forgiveness is preposterous. No one would do that! And, yet, the king does, and here is an example of pure grace, a clean slate, literally, new life for the slave.     Which, again, makes the first slave’s demand of his counterpart so inconceivable. How can one who has been forgiven an impossible debt demand so much more from another? This also boggles the mind. And, yet, to Lose’s point, how often do we lose sight of what has been done for us and fail to offer the same grace and mercy that has been shown to us to others? As we observe Rally Sunday and enter the new program year, this text is an apt reminder to what lies at the heart of our life together. Forgiveness. We cannot go it alone. We need one another. We have been, continue to be, and will be shown forgiveness and grace by God. The health of our community rests, in part, in our ability to reflect this reality of forgiveness to one another. Is 7 times enough? Apparently not. 77 times is, in essence, innumerable. It betrays love, mercy, and grace at the center of how we live. Which is precisely the essence of the God we worship: Love. Mercy. Grace. It will certainly be hard at times, but there is really no other way.