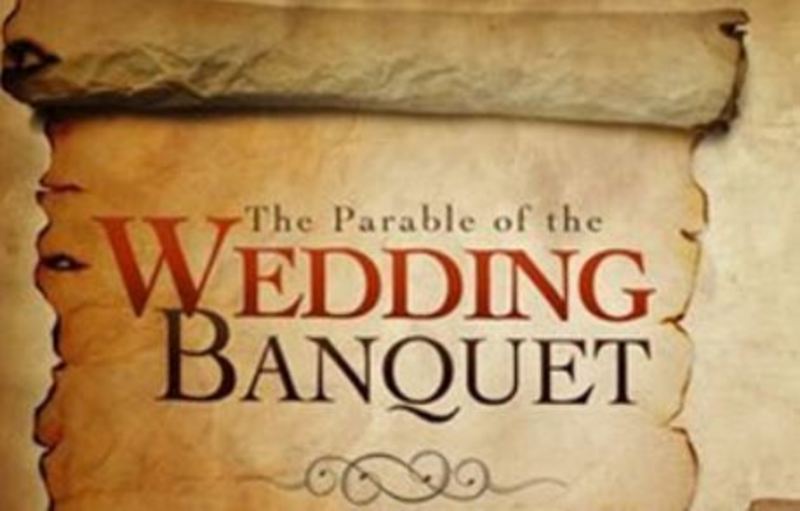 There were so many shocking things about the parable you just heard that to take its “typical” reading that the King stands for God, and that this is about how God offers God’s abundant bounty to people good and bad, and then doles out punishment for the rejection of these free gifts, with only the few righteous ones escaping the pit of darkness – is not going to work for me. Sorry, but I cannot accept the moral of that story – that being -- don’t mess with God, get thee to the party – and make sure you wear what is expected of you -- OR ELSE!

The last few weeks has been a time of incredible chaos in this country. We saw many people at a party in the White House, and the President and his wife, get COVID because of him, and his administration’s reckless disregard of science, and cavalier attitude towards the lives of others, including those most important to him. I am wondering if you might be thinking the same thing I am about this parable. I do not believe that in this parable the King is God. No, this story, to me is actually about a really bad person – a really bad leader – a really bad human King. And Jesus knew all about bad leaders. One of the reasons Jesus spoke in parables was because to speak specifically about, and directly to the corrupt leadership of his time would get him arrested immediately, and he still had work to do before that eventually happened. So what are the characteristics of this human King that immediately stand out? First, he is very unpopular. Even though he is putting on a really nice party, and at the castle presumably, even his friends don’t want to come. So, he send out his slaves, really vulnerable people, who have no choice in the matter, to try to persuade them to come not once but twice. But, his inner circle people really don’t want to go, and there is strong resistance, and this results in loss of life to those who were the most vulnerable.

Again, we see parallels to our times. We have protests in our streets because people are refusing to remain silent and do nothing about the issues of systemic racism, discrimination and police brutality. Remember the many citizens who, over the last four years have refused to accept the President’s invitation to be honored at the White House or to work for him on the basis of their convictions that to do so would be against what they feel is right. Not accepting the invitation of the President in our times, has become a show of solidarity with the many people who have been harmed by this administration’s policies, and the President’s lack of concern for those who are the most vulnerable. It is not surprising that the King in the parable retaliates against his own people and their decision to not be bullied by murdering them and burning down a city. Yes, a whole city! If this King doesn’t get his own way – then there is war, violence and death. And for a party – for his own ego – what a bully!

But now there is no just persuading guests to come. The party must go on, and the servants are sent out again, but this time, they line everyone up and make them go to the party. The King must have his party, and so it no longer becomes optional. These guests now also become enslaved by the King, and are forced to dress in the right required clothing, pretend to have fun, and to do whatever it takes to please him, otherwise risk their lives. I wonder how many times you might have found yourself in a similar position. How many times have you, in a job situation, or other areas of your life been torn between standing up for what you believe in, and risking recrimination or consequences from someone who has more power over you? Many people come to me to talk about how hellish their work situations are when someone they have to work with or report to makes their lives miserable. We spend more time at work than we do with our friends and families, and it can be horrible when you are forced to feel like you have no choice or agency. For this King it is not about good leadership or the protection of his people. For the King in this parable it is all about his ego, his power, and his control over others.

So, there is no way in my mind that this tyrant King is my God. This is the scary God that I reject, and not the loving Shepherd who we heard about in the 23rd Psalm. That Jesus, my Jesus is loving, forgiving, compassionate, protecting us from harm and from the dangers of the world, being with us through the valley of the shadow of death. That Jesus shields us from the bullies of the world, and stands up for those who are the most vulnerable – the poor, the sick, the homeless, those in prison, and those who are unfairly treated by those who hold power.

And so where is God in our parable today? Jesus is the one who stands up. Jesus is the one who didn’t succumb to what the King wanted him to do. Jesus is the guest who refuses the wedding robe. Jesus is the one who is chosen. This parable also foreshadows what will eventually happen to Jesus, the one who stands up for his people, and who models what Paul says we all should do – to “do whatever is true, whatever is honorable, whatever is just, whatever is pure, whatever is pleasing, whatever is commendable.” Yes, this is a Good Friday moment for Jesus played out in this parable. The time that it seemed like the bully won. But, we know that is not the end of the story. We know that Jesus comes out of the pit of death and pulls the rest of the suffering out with him. For in Jesus, our God – love ultimately triumphs. Love ultimately wins against bullies. It may not seem like it at the time when there is bully King, er President in power. But, by staying true to those important truths of what Jesus modelled and taught us, you will never regret it -- you will be blessed -- and love will win. Amen