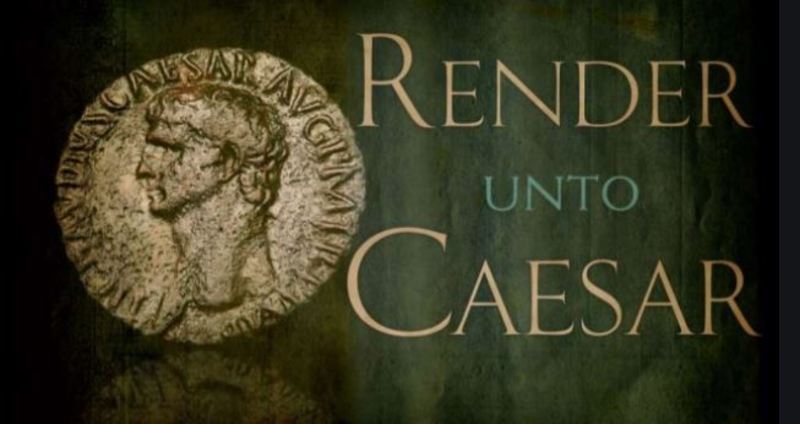 Prior to the Civil War various states had anti-literacy laws for African Americans. In essence, you were not allowed to provide a secondary education to a black child. Missouri was among the states with laws on the books enforcing this rule. So, what does one do? Do what the Rev. John Berry Meachum did in St. Louis. Create a steamboat school or a “Floating Freedom School”. Meachum bought a steamboat, outfitted it with desks, and brought children onto it, so that they could learn while floating on the Mississippi River beyond the geographical boundaries of the state of Missouri. Even the rigid rule of law was superseded by Meachum’s wonderful creativity.

A similar statement might be applicable to Jesus in today’s gospel text. Rule followers abound! Yet, the rigidity of the rule followers is superseded by Jesus’ wonderfully creative response about paying taxes to the Romans. For background: the Herodians are in cahoots with the occupying Romans, and their question to Jesus about whether or not one should pay a tax to Caesar is intended to trap him. The question is rather ingenious. If Jesus replies, “Yes,” one should pay taxes, the multitudes who have been following Jesus and hoping he will save them from the Romans, will abandon him. Jesus will lose his power. If Jesus replies, “No,” one need not pay taxes, then the Herodians will have evidence that he is seditious and will arrest him. What to do?   Well, think in a wholly other way than the tired and worn rule-obsessed way of the religious leaders. And Jesus does just that. . . and more!

To begin, Jesus’ question makes the Herodians look like a bunch of Keystone Kops. In their effort to trap Jesus, they themselves are trapped. Jesus’ innocent question, “Show me the coin used for the tax,” catches them. Jesus does not possess a coin with the image of Caesar on it and the inscription: Augusti Filius August Pontifex Maximus--Tiberius Caesar, son of the divine Augustus, high priest. He doesn’t possess such a coin, because to possess the coin would break the second commandment to not make a graven image or likeness and ascribe it divinity. There is only one God. However, the Herodians produce a coin instantly. To the crowds, this is game over before it even begins. Who do you trust? Jesus or the hypocrites who profess allegiance to God, yet carry with them a symbol of fidelity to Rome?

Furthermore, Jesus’ conclusion, “​Give therefore to the emperor the things that are the emperor’s, and to God the things that are God’s.” Shatters the framework that the Herodians had used to shape their world. Jesus pulls a John Berry Meachum if you will. His question parks the boat of this controversy outside of the normal boundaries that have been set up to adjudicate these things. There isn’t a simple “Yes” or “No” to the question. Jesus’ expansion of the question that he was asked opens up an entirely new and different way to see the world and to be in the world.

To those who want the order and laws to be kept, Jesus allows for that. Render to Caesar what is Caesar’s. Yet, Jesus implodes the whole structure of worldly power and divine right of rulers and any semblance of control by noting that all that belongs to God should be given to God. And the only response to this framing is that everything belongs to God. Sure, you can give to Caesar. Yet, also know that what belongs to Caesar is also God’s. It’s ALL God’s! The rules no longer apply, or they are subsumed in the divine and a wholly other way of being is imagined.

Indeed, Jesus transforms the imagination of those around him that day and invites our imaginations to be transformed as well. At the very heart of his response is the understanding that while the image of the emperor may be stamped upon a coin, the image of God is imprinted on the whole of creation and, more precisely and more importantly, on you. Humans have debated the role of religion in the public square, and Jesus’ encounter with the Herodians in today’s gospel raises the issue yet again.

Yet, far from a prescriptive and legal definition of what is possible or appropriate, the response that Jesus gives expands the understanding that we have of what is ours and the very realm in which human politics are played. You can try and split hairs, play on peoples’ allegiances, but at the end of the day, the truth that Jesus confirms is that God is the beginning and the end. God is the ground of being and the fullness into which we ultimately merge. God is in all things and beyond all things. There is no place that God is not. Therefore, try and trick yourself into believing that you stand outside of the divine reality. You can. It’s just that you’re lying to yourself.

And when we see the world and ourselves and each other from the perspective that the divine image is imprinted upon us all, how do we respond? Well, one would certainly say that John Berry Meachum glimpsed this truth and it shaped his action in the world. One could argue that those who created the rule not to educate African American children were still stuck in a mean and petty and obscene perspective of the world devoid of this sense of God all and in all. You can’t glimpse the whole world filled with the presence of God and want to limit the rights of others, or restrict their livelihood, or try and suppress their freedoms.

Thus, Jesus’ words have import and meaning in our world. The imagination that he calls us to is a gracious and fearless recognition that the world is not a zero-sum game with winners and losers; the world teems with the abundance of God’s mercy and love for all. And how do we engage the world if that is our perspective? The imagination that Jesus calls us to is the conviction and confidence that it is not might or wealth that makes right; the righteousness of God supersedes the various ways that we try and compartmentalize the world and others. And how do we live with ourselves and others if this is our guiding principle? The imagination that Jesus calls us to is the hope and anticipation that the cruelty and degradation of the world is already being overcome by the grace and peace of God. What actions do we take if this actually undergirds our belief?   Far from holding on tightly to what we perceive is power--much like the Herodians and those who created laws to prohibit educating African Americans--Jesus’ teaching brings the facade tumbling down. There is a liberating promise embedded in Jesus’ exhortation. The image of God is imprinted on you. You are God’s child. So, live into the freedom that you have been given. Live into the love and acceptance always already shown to you. Live into the grace that undergirds everything. As you do, you can never see the world the same again. And that’s Jesus’ point.