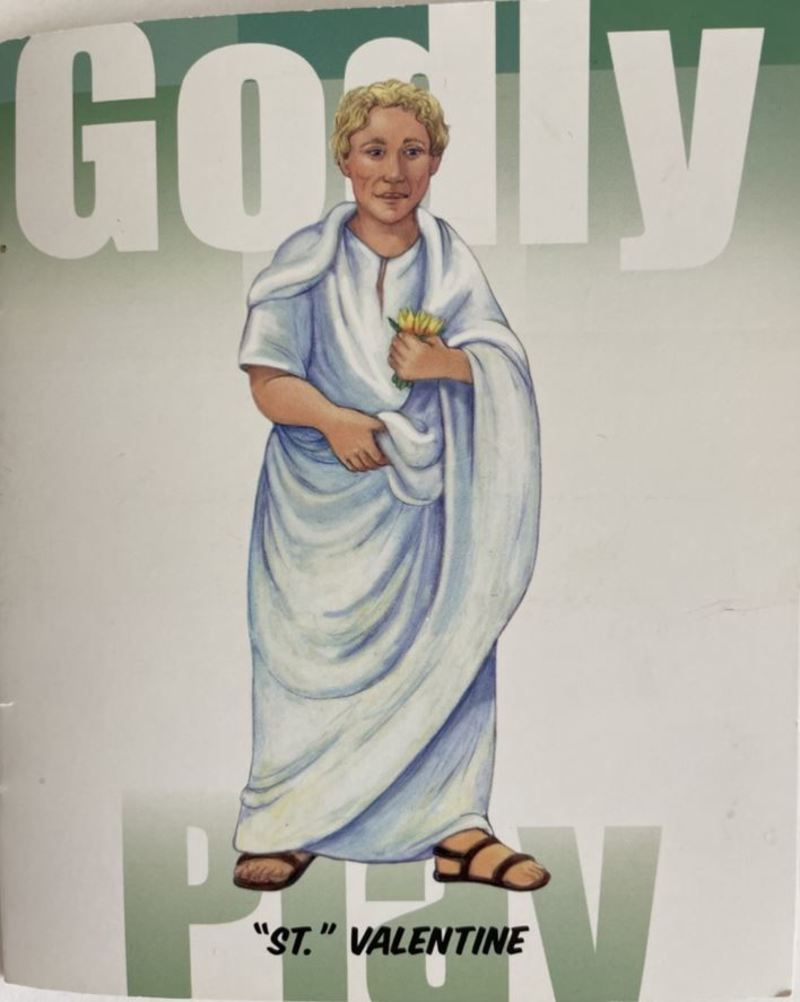 This Sunday is the Fifth Sunday of Epiphany and the color is green.

Although it is a week early, I am sharing the story of Saint Valentine, the saint who loved so well. In past years when we have been able to be together in the church, we have made and sent valentines to people in the parish. This year we have many people in our parish who could use a valentine.

This week, I am sending you addressed and stamped envelopes and materials to make a valentine or two for someone in the parish. After you finish the story, please take a few minutes to share the love and light of Valentine’s Day with someone by making it special from YOU!   Have a good week. Be safe.  Happy Valentine’s Day.

This is the story of Saint Valentine. The church remembers him during the time of the color green. I wonder why we remember Valentine?

There once was a man named Valentine who lived in ancient Rome; not in one of the big houses of smooth, white marble but in rooms above the noisy street. He was a doctor.

In his rooms he had many things to heal people, mostly herbs that he picked ion the fields outside the city. He used a mortar and a pestle to grind up the herbs so he could use them for medicine. When people came to see him, sometimes they did not have enough money to pay him. So he would accept something they had made like a pair of sandals or some warm bread.   Not everyone knew that he was also a priest. That had to be kept secret, because in those days it was against the law to be a Christian. Whenever anything bad happened in the city they would blame the Christians and put them in jail or kill them. So when Valentine prayed he did so quietly after closing his door.   One day an old man and a little girl came to his home. She could not see. She was the old man’s daughter. He took care of the prisoners in the big jail in Rome. Valentine knew it would be hard to cure her because she had been born blind. But he loved to talk to her and he put something cool and wet on her eyes to make them feel better. When the old man wanted to pay, he said, “No. I want to give this to your daughter.”

At night when he prayed for his patients he prayed most for the little girl.

One time Valentine heard a noise outside his door. He hoped it was the little girl, but instead there was a terrible crash. The Roman soldiers broke into his home and took him away. They had found out that he was a Christian and they took him to the very jail where the little girl’s father was a jailer. The old man could hardly believe his eyes when Valentine was brought into the jail. He did not know what to do.

A few days later the soldiers came to take Valentine away. Before he left, he asked for a pen and some ink and something to write on. The jailer hurried away to find it. When he came back, Valentine wrote something on the piece of paper, rolled it up and said, “Please give this to your little girl.” Then he said “Goodbye,” putting a hand on each shoulder and looking the jailer in the eye. The old man watched as he disappeared and knew he would never see him again.

That night when he went home he gave the rolled up piece of paper to his little girl. She asked, “What does it say father?” Just then a crocus that had been rolled up in the paper fell to the floor. The old man read, “From your Valentine.” When the little girl picked up the flower to her great surprise she could see it.

We remember Valentine because he loved so well.