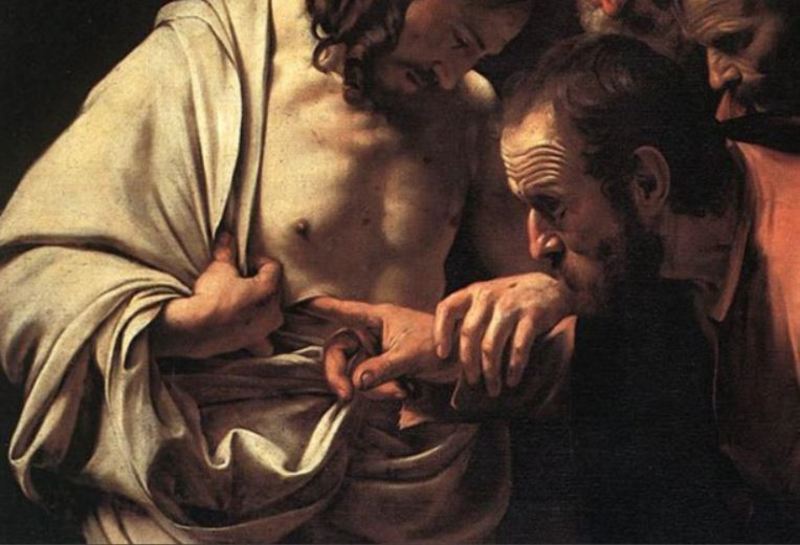 Yet, with regard to Thomas his doubt is transformed into trust. One moment, he seemed all but destined to return to his fishing roots and walk away from the itinerant ministry that he shared with Jesus. The next moment he believes and becomes one of the leading apostles of the first century. He eventually travels from Palestine to India--present day Kerala state on the southwest Indian coast--and spreads the gospel. So much work was accomplished there that Thomas is considered the patron saint of India. He reportedly landed in Kerala in 52 CE, and he was martyred twenty years later. The king at that time led Thomas outside the city and ordered four soldiers to take him to the nearby hill, where they speared Thomas and killed him. Thus, he--like many of the early apostles--meets a rather violent and ugly demise.

And for what? For spreading the good news of Christ? The legend goes that king was jealous of Thomas for converting his wife to Christianity and had him killed. Why was that so offensive? Why would belief in Jesus be the cause of death? Was the queen’s conversion seen as a political action? Was it interpersonal? Regardless, these questions invite us to consider what exactly we mean by the good news of Christ. What is it that we believe? And, ultimately, what difference does it make?

Many of you are familiar with the quote from N.T. Wright that was used in Friday’s weekly email: Jesus's resurrection is the beginning of God's new project not to snatch people away from earth to heaven but to colonize earth with the life of heaven. That, after all, is what the Lord's Prayer is about. I would also remind you of the quote from Wolfart Pannenberg, “The evidence for Jesus' resurrection is so strong that nobody would question it except for two things: First, it is a very unusual event. And second, if you believe it happened, you have to change the way you live.” Both quotes underscore that faith does not take us out of the world, rather it invites us to more fully to embrace the world, to embody God’s love and grace to the world, and, in the process change how we live. Or as the prayer notes, that we may show forth in our lives what we profess by our faith.

On the one hand, showing forth with our lives may look like Thomas travelling to India to spread the good news. However, it need not be that extravagant. And far from converting people, the work that we do is all about embodying the model of love, mercy, and grace that Jesus gave to the world. Feeding the hungry, welcoming the outcast, advocating for the marginalized, loving the sinner, and seeking justice. Indeed, Adam Russell Taylor in the most recent Sojourner’s magazine noted that church in the future may be less structured around a particular religion and more around following the ways of Jesus. Literally, doing what Jesus did. Taylor writes, “The time is now to revitalize the church and Christian movement by engaging in greater and more faithful public witness and ministry to advance peace, justice, and the common good.” Or, as N.T. Wright opined, “colonizing the earth with the life of heaven.”

So, what does that look like? A recent example from this past week was the groundbreaking of affordable housing units in the south end of Stamford by the Housing Development Fund (and its Ex. Director, Joan Carty). Among the speeches was a prophetic comment from a local legislator. He commented amidst the noise of the worksite adjacent to the busy roadway that it was the “sound of transformation”. And you could see the transformation of the neighborhood among the many new, tall, and beautiful apartment buildings in that area. However, he noted that with transformation comes the reality that many are left behind. They are our concern. They are our responsibility. The affordable units are a bit of the life of heaven on earth. The reminder of the legislator is a bit of the life of heaven on earth.

While you need not do Joan’s work nor do you need to speak like the local legislator, what you do need to do is understand how your life shows forth what you profess with your faith. What does that look like? Where and how do you bring a little bit of the life of heaven to earth? It can be as easy and difficult as Karl Barth’s famous response to the question, “What do I do for world peace?” To which Barth replied, “Love your child.” And with all that we do, there is an ease and a difficulty to living out this call. Whether it is beautifying worship with music or flowers, or praying consistently for those who are sick, or visiting those who are shut in, or organizing and participating in food drives, homeless lunch making, or engaging in activities to understand and end white supremacy, systemic racism, and anti-black bias, or planting a tree, or conserving energy, or serving on a board of a non-profit, or engaging in work that brings pleasure to you as well as impact to others, or the myriad other ways that you put flesh on the bones of God’s love for you and for the world. In your work, in your relationships, in your leisure, and in the in-between times, we are all in process, on the way. However, the question that we are left with this day and each day is, “how do we show forth in our lives what we profess by our faith?”