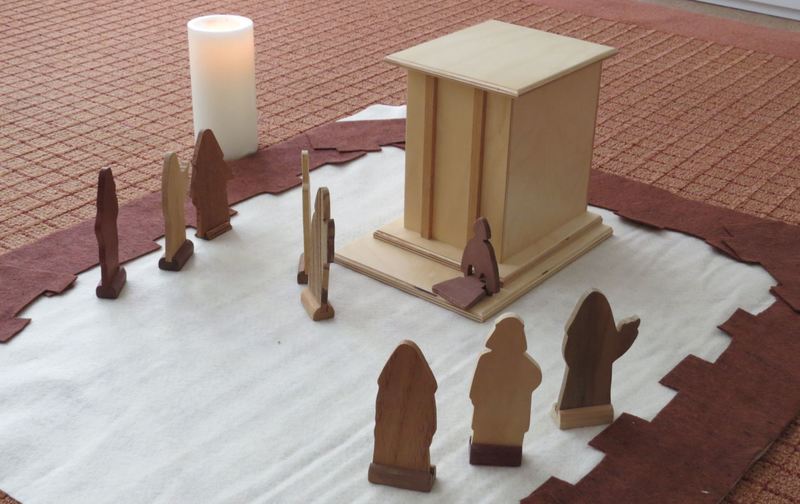 This story takes place in the city of Jerusalem.

After Jesus went away, so that he could be with us always, in every time and every place, Jesus’ followers received God’s gift of the Holy Spirit. The Holy Spirit gave them so much love that they would do what Jesus would do. They said the wonderful things that Jesus said, and they did the amazing things that Jesus did. They did this first in Jerusalem.

Now Peter and John were going up to the Temple at the time of prayer, three o’clock in the afternoon.

A man who had never been able to walk was being carried to the gate of the Temple. He sat there every day and begged.

As Peter and John came near the Temple the man called out, “Money! Money!” Peter and John looked at him. “Look at us,” they said. And he looked. Peter said, “I don’t have any money, but I will give you what I have. In the name of Jesus Christ, stand up and walk.” The man got up. He began walking… and leaping and praising God.   And he entered the Temple with Peter and John, still praising God.

The people in the crowd were filed with wonder and amazement. Then Peter said to them, “We did not heal this man. He was healed by the name of Jesus Christ, whom you crucified. The one God raised from the dead. By Jesus, this man is standing here well. Repent, change the ways you live, and follow the way of the Kingdom of God.” And about five thousand people did.

I wonder what the people in the crowd will tell others about Jesus and the kingdom of God?

This Sunday is the Second Sunday after Pentecost and the color is green. This is the beginning of the long green growing season. This season takes us through the summer and most of the fall. And then it is time for the season of Advent.

In the next few weeks, we will be reading and hearing stories about the things Jesus’ friends said and did, after Jesus went away. The disciples were able to do these things with the power of the Holy Spirit.