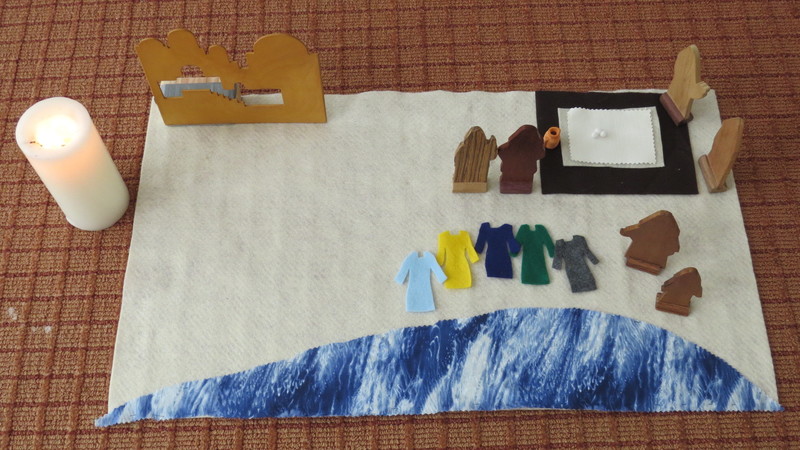 DORCAS, A FOLLOWER OF JESUS, HELPS THE POOR IN JUDEA

This story takes place in the land of Judea in the city of Joppa.

When Jesus’ followers received the gift of the Holy Spirit, they were filled with love and power. They could do and say the things that Jesus said and did. They did this in Jerusalem, in Samaria, and now in Joppa, a city in Judea.

Dorcas was a disciple of Jesus, and she was always doing good.   When Dorcas received the gift of the Holy Spirit, she did what Jesus would do but in her own special way.   Dorcas helped the widows and the poor.   She made clothes for them.   But one day Dorcas became very sick. She was dying.

When she died the women washed her, and they laid her in her room on a bed.

Meanwhile other disciples sent for Peter.   When Peter arrived, the women were crying. They showed Peter the clothes Dorcas had made for them.   Peter began praying and turning toward Dorcas he said, “Dorcas, get up.”   Dorcas opened her eyes. Peter took her hand, helped her up, and she could stand.

Peter called to the people, “Look. Dorcas is alive.”   Then many believed that Jesus was the Christ. And they began to follow Jesus and the way of the Kingdom of God.   I wonder in what special ways we can show our love to God and others?

This Sunday is the Fourth Sunday after Pentecost, and the color is green.   This week’s story is about a woman named Dorcas who was a follower of Jesus; sometimes she is called Tabitha in the Bible. I like this story because it is about a woman, who does the work God has given her to do. In the earliest days of our faith both men and women did God’s work and told others about Jesus and the Kingdom of God.