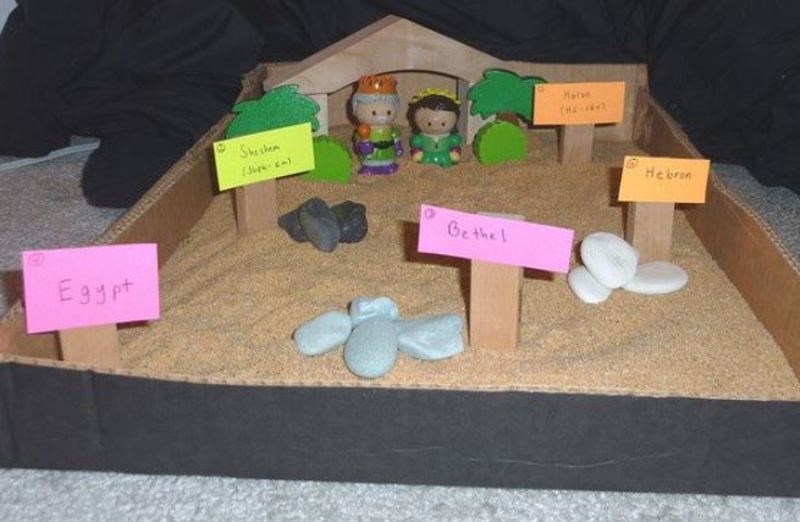 When the flood was over, the creatures went out in all the four directions of the earth to fill it up with life again. They often gathered along the rivers. The people lived in small villages and then cities. One of the most ancient and greatest cities was called Ur.

But there was one family that believed that all of God was in every place. They did not know it yet but that is what they thought. Abram and Sarai were part of that family.

When it came time to move to a new place, they were not sure that God would be there. So they wondered what the new place would be like.

They walked toward Haran with their sheep and their donkeys. Even the old people and all the children went, too. They slept in their tents at night, and during the day they walked along the great river called the Euphrates. It showed them the way and it gave them and their animals water to drink.

It took a long, long time. Finally, they met people coming out of Haran. They knew their journey was almost over.   And then they were there.

Sometimes Abram would go out to the edge of the desert and look across the sand and into the sky. Then God came so close to Abram, and Abram came so close to God, that he knew what God wanted him to do. God wanted Abram and Sarai to move on again to another new place.

Abram and Sarai did what God said. They went into the desert to the west of Haran and walked toward Canaan. They went with their sheep, their tents and their family. This time there was no river to show them the way or give them water to drink.

They finally came to a place called Shechem. Abram climbed up a hill and prayed to God and God was there, so Abram built an altar to mark the place. Then they went on.

Next they came to a place near Bethel. Abram prayed again and God was there, also. Abram built an altar to mark this place, too. God was not just here or there. All of God was everywhere.

Then they went on to Hebron to make their home, near the Oaks of Mamre.

One night God brought Abram outside. He looked up into the sky. Then God came so close to Abram, and Abram came so close to God, that Abram knew what God was saying, “You will become the father of a great family, and Sarai will be the mother. The members of the great family will be as many as the stars in the sky and grains of sands in the desert.” And then God changed their names to Abraham and Sarah.

I wonder what part of this story you like best?

I wonder what part of this story is the most important?

This Sunday is Pentecost Five and the color is green. I will be telling this story at the church on Sunday. And this will be our last story for a while. We will have no stories in July, enjoy your summer as I will be enjoying my summer with my grandchildren.

I like this story because no matter where we go, we can find God. God is always with us, just as He was with Abraham.

I also like the symbol of the stars; it reminds us that we are all people of God, and we number as many as the stars that we see in the night sky.