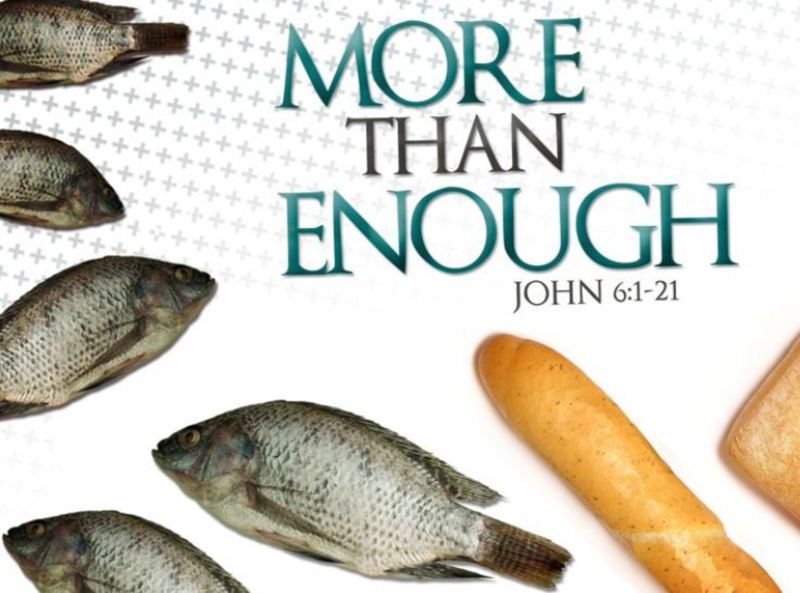 Sermon on Having Enough - The Rev. Debra Slade

My mother used to tell me and my siblings stories of her life growing up on their prairie wheat farm outside of High Bluff, Manitoba. With seven children, and no running water nor electricity it was challenging for sure. But the theme of her stories were meant to convey to us how privileged we were to live in the suburbs of Winnipeg where houses had nearby conveniences, and homes had appliances like washers and dryers, and toilets that were inside. My Dad went off to work every day with a suit, tie, hat and briefcase but his assistant manager job didn’t pay much, $50 a week, we were told, and there were things we definitely didn’t get as kids like new bikes, the latest clothing fashion, and to go to summer camp or better still a cabin at the lake that most of my friends’ parents owned. So comparatively speaking, my brother and I thought we were poor, but to my mother we had more than enough. The story she would frequently tell about her own father’s way of making ends meet would go something like this: “When we were little we would always beg our Dad for candy and gum, and most of the time we would never get any. But one day, he came home from the town’s General Store with a pack of Wrigley’s Spearmint Gum. It had six wrapped sticks, and we were excited to get one stick each, since Alice, the baby of the seven kids was too young to chew gum. But, instead, our Dad took one stick, unwrapped it, and carefully cut it into six pieces, and that is all that we got.” I would always ask about what he would do with the other six pieces, and she would say she never knew, but that was all she got, a tiny sliver of gum maybe no more than a half an inch high. But, she said, it was memorable all the same, and they would save it by putting it on the bedpost overnight just like the hit song: “Does your chewing gum lose its flavor on the bedpost overnight?” And fun fact, Bruce Springsteen says it’s one of his favorite childhood songs. If you don’t know it, it’s on YouTube! But my Mom’s point, of course, was that one-sixth of one stick of chewing gum was still delicious, and apparently, with intention, lasted for days.

In our Gospel reading, we heard of the familiar story of the feeding of the five thousand by Jesus with just five barley loaves and two fish. Miraculously, every person got as much fish and bread that they wanted, and until they were satisfied. And, after that, Jesus instructed his disciples to gather up what was left of the bread, and they had enough left over to fill twelve baskets. Not only were the crowds amazed at the power of Jesus to meet the needs of so many with so little, but they were also fed and satisfied by him as they all  literally broke bread together. This portion of John’s Gospel ends with Jesus walking on the Sea of Galilee out to his disciples who are in a boat in rough waters with a strong wind. He tells them: “It is I, do not be afraid,” and, after he joins them in the boat, it immediately gets them all safely to land where they were headed. Another miracle, but this one done more privately, with his friends, his disciples who were frightened by the storm, and then frightened by the sight of Jesus walking on the sea. In both stories, Jesus, the Christ is able to provide exactly what is needed, and it was enough. The feeding of the 5000 is recorded in all four Gospels, with Matthew and Mark later recounting a second similar miracle where 4,000 people were fed by seven   loaves and a few small fish. Jesus walking on water is included in three Gospels, but not in Luke. Matthew’s version includes Peter walking on water too but then sinking when he becomes afraid. Jesus saves him but calls out Peter’s lack of faith. John’s is the only account that includes the statement that the boat then immediately got to the shore. These miracles are certainly memorable for many reasons, but their meaning has relevancy for us as well.

So much of the last sixteen months of the pandemic has, more than anything else, helped us to clarify and prioritize the things that were truly important to us – the things that really mattered. We learned we could give up haircuts, pedicures, restaurants, movie theaters, attending church in person, parties, weddings, and going on vacation. Fear of dying was certainly a prime motivation to give up these things, but we also were forced to do so as well by the government restrictions. I still travelled to work at the hospital for most of the time, and that helped me to have a sense of normalcy despite having to be covered up for hours at a time with what we called the tight duck mask and the eye googles. But we made these sacrifices and connected on zoom and facetime with each other. For my single friends who lived alone, particularly those in Canada, where there were specific rules on how many people you could see, and for a single person it was only one other person, and that was particularly lonely. What we learned because of the pandemic was that we could give up so many things we thought were important to our lives – the luxuries – the treats, but what we could not give up were the people that we loved, missed desperately, and wanted to hug, hold, be there face to face. We missed the faces -- we missed the smiles -- we missed people. And as this, oh so important truth plays out around the world, so should the truth, that if people are so important, then sharing should be paramount and important too. In fact, so important, that by sharing what we have, everyone can have enough, and everyone can be satisfied, particularly with food, as in our story of the feeding of the 5000.

According to the Connecticut Food Bank: “More than 400,000 Connecticut residents struggle with hunger; more than 117,000 children are food insecure. These are people from all walks of life – children, working parents, seniors, or people living with disabilities. They are your neighbors.”1 During the pandemic, the distribution of food to those who needed was challenged on many fronts because of the increased demand, and the staffing challenges because of the COVID-19 risks. Feeding America estimates that 45 million people (1 in 7), including 15 million children (1 in 5), may have experienced food insecurity in 2020. And within these statistics are the disparities showing that 21.6% of Black individuals (1 in 5) may have experienced food insecurity in 2020, compared to 12.3% of White individuals (1 in 8). 2 There is enough wealth in America to take care of those who are the most vulnerable. As followers of Christ, we must be alarmed by our world where the disparities between the most wealthy and the most poor continues to grow at an alarming rate. For example: “On April 12, America’s 719 billionaires held over four times more wealth ($4.56 trillion) than all the roughly 165 million Americans in society’s bottom half ($1.01 trillion). In 1990, the situation was reversed   — billionaires were worth $240 billion and the bottom 50 percent had 380 billion combined wealth. And one-third of U.S. billionaires’ wealth growth over the last 31 years came during the pandemic.”3 Not only is the disparity getting so much worse but a huge part of it came during a time when so many of the lowest paid workers were particularly vulnerable, with minorities particularly hard hit. This week, during Jeff Bezos’ supersonic eleven-minute joy ride he earned $1,674,277.00. He earns three times more per second than the average American worker earns in a week.4

As Jesus saved his disciples in the stormy sea, we must work for justice in America, and model his example of how in God’s economy there is always enough. The pandemic has taught us the importance of human relationships over material things. Let us strive to build a kingdom of heaven on earth where we extend our love to all, but particularly to those in greatest need, and do this by sharing what God has given us in this world of abundance. We have enough. We definitely have enough. Amen.