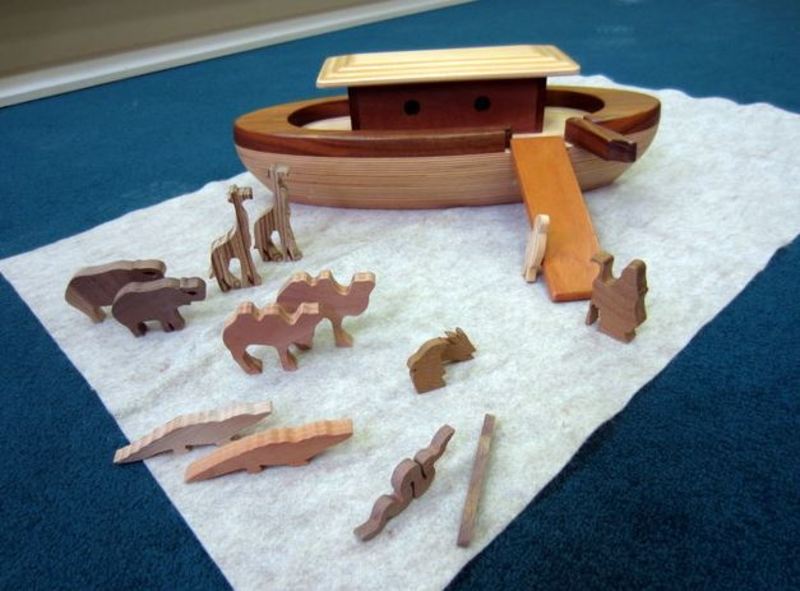 When God created everything, God said, “It was very good.”   But people began to do bad things. God decided to send a great flood of water to wash everything clean and make it new again.

Noah and his family began to build the ark. As they were building the ark, animals began to come from all the corners of the earth. They came two by two to fill the ark.   When the ark was finished it began to rain. The rain kept coming. The puddles ran together and soon water covered everything.

When the creatures on the ark looked out into the rain all they could see was water. It rained and rained, it rained for forty days and forty nights.

But God did not forget the creatures on the ark. After forty days and forty nights the rain stopped. Then God sent a great wind to dry up the water, and the water began to go down.

Noah took the dove. He held it carefully and sent it forth. It flew and flew. Noah held his hand out and received the dove. There was still nothing but water.   Noah waited seven days, he sent the dove forth again. It flew and flew. This time when it came back it had a fresh olive leaf in its mouth. Now there were green growing things on the earth again.   Noah waited seven more days. He sent the dove out again. This time it did not come back. It found a home. It made a nest and it stayed there.

The water kept going down, and finally the ark came to rest on the earth.

All the animals came out of the ark. They were home, too.

Everything was clean and new. Noah and his family were happy. They wanted to give thanks to God, so they built a special place, an altar, and they prayed their thanksgiving because they were home, too. And God promised never to send such a flood again. God gave them a sign, a rainbow, so that we can always remember God’s promise.   I wonder what part of this story you like best?   I wonder what part of this story is most important?

This Sunday is Pentecost Ten and the color is green. Because I am telling a water story, I am going to use blue paper. We will read and hear water stories in August and hopefully in September we will be back in the Godly Play classroom.

Water is in the beginning of the first Bible story, “the Spirit of God was hovering over the waters”.