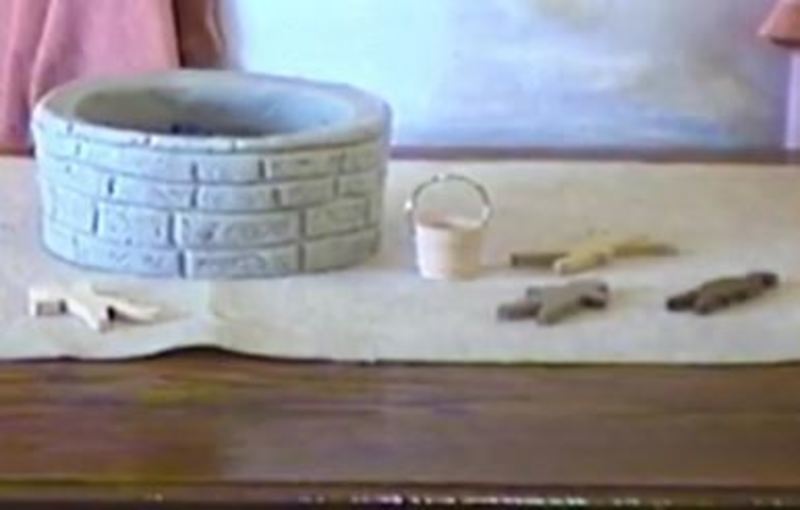 JESUS AND THE SAMARITAN WOMAN

One day Jesus was travelling in a strange land between his home and Jerusalem, where the Temple was. It was very hot and dusty, and Jesus was thirsty after walking so far. His disciples were off looking for food. Jesus sat down beside a well and waited.

Soon a Samaritan woman came to draw water from the well for her family. Since Jesus was a Jew, this woman did not expect him to speak to her, because Samaritans and Jews had not gotten along for many years. And in those days men usually did not speak to women in the street, not even when they knew each other. But Jesus was different. The woman was really surprised when Jesus asked her for a cup of water.

They started talking, and Jesus discovered that the woman had a lot of questions about God and about her religion, about Jesus, about her people, and ever about herself. And Jesus talked to her and told her marvelous things. The woman was surprised and excited. She gave Jesus water, but she found that she was the one who was filled.   Later the woman ran home and told all her friends that Jesus was all that they had been hoping for, the Messiah. The whole town ran out to see for themselves. And they believed.

Finally, the disciples returned from town. They were amazed that Jesus would speak with a woman because it was so unusual. But they could not deny that this woman had done what they were supposed to do. She had shared her water and her story with Jesus. And she had brought all her friends to see him and to believe in him too.

This Sunday is Pentecost Fourteen and the color is green, but I am using blue paper for this week’s Water Story.   This is our last Water Story; it is from the New Testament in the Gospel of John. This story is about a different kind of water. It isn’t a storm, or a sea, it is water from a well. God is with this woman who spread the story of Jesus. I wonder what water really means? Have a good week. Be safe.

I miss you!   I want to thank MaryAnn Getty-Sullivan for her story of the Woman at the Well.