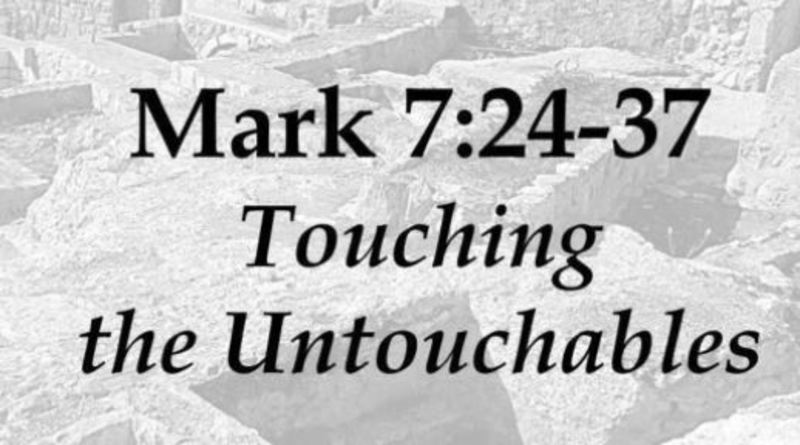 As it would happen, Jesus crosses such a line in today’s gospel text, though it isn’t just the obvious line that sits like an elephant in the room. There’s more. I think we recognize the awkwardness of what he says to the Syrophonecian woman. Jesus’ response to the woman’s plea for her daughter’s healing is as troubling 2000 years later as it was then. “It is not fair to take the children’s food,” Jesus declares, “and throw it to the dogs.” Dog means dog. There is no candy-coating Jesus’ insult. Nevertheless, the Syrophonecian woman deftly replies, “I resemble that remark.” Or to put it in the language of Mark’s gospel, “Sir, even the dogs under the table eat the children’s crumbs.” Which not only challenges Jesus, but it changes him. The woman’s daughter receives long-distance healing, and Jesus receives a reminder of the medicine that he meted out a moment earlier and now failed to follow.

The other line Jesus crosses is defying his own teaching. A moment earlier in the gospel, Jesus instructs the people that they were not to get their religious undies in a bundle particularly if there were people who stood in need of help. Help that might run counter to their social conventions, but help that could not be denied because of the need, regardless of who they were, where they were, or how they were. What is fascinating about the story of the Syrophonecian woman in Mark’s gospel is that this foreigner, this woman, this unclean individual--dog for all Jesus was concerned with--this woman embodies the reality of need that runs up against the custom and code of how people were supposed to act. She was the example Jesus articulated in his teaching but now fails to heed. Compassion was the substance of exactly what Jesus taught a moment earlier. Though Jesus does not initially respond with such sympathy. Were it not for the woman’s determination and savvy, Jesus would have forsaken his own teaching.

Now, I imagine that such an interpretation of the text may be difficult for some to hear. Indeed, there are any number of commentators who contort themselves to say that Jesus wasn’t really a jerk and that, as fully divine, he could do nothing wrong. Yet, I wonder if allowing Jesus to be human--that he could have been exhausted, he might have been in a hurry, he possibly may have misread the whole encounter with the Syrophonecian woman--allowing Jesus to be human allows us to enter into the story more fully and to appreciate how hard compassion is. If Jesus struggles with it, well, then maybe we might also. Not that we are relieved from compassion. It remains at the heart of our calling within life and certainly the Christian tradition. We understand, however, that our efforts to live lives that approach and approximate compassion and seek to respond in such a way in the world is a process that we are not alone in. Jesus is right there with us.

Particularly, being compassionate toward those whom we might think do not deserve compassion is a lesson that powerfully confronts us today. We might not call people dogs, but do we think that those who are homeless should be thankful for the scraps that fall from the table? Do we blame those who are victims of domestic violence or housing insecurity? Do we believe that all you need is a little conviction and some hard work and everything will be okay, and if you struggle at all, well, that must be your fault? Do we even chide those who are sick for not taking better care of themselves or maintaining more responsibility for their lives? Compassion can be a hard thing to share in this world. Precisely because so much of our world is structured and ordered in a way that creates strata or castes of those who are acceptable or worthy and others are not. It’s subtle, but such distinctions creep into our consciousness all the time.

Indeed, this week’s On the Media radio program cataloged a bit of the scientific history of seeking order but creating classifications that led to eugenics and prioritizing people due to race, gender, sexual orientation, ability, and aesthetics. Lulu Miller who wrote, Why Fish Do Not Exist, reveals the damaging side of taxonomist David Starr Jordan’s efforts to categorize the natural world. A seemingly innocuous activity, yet one that had ramifications leading all the way to Hitler’s dream of a master race. She talks about eugenic competitions at county fairs in the late 19th and early 20th century rewarding the cutest baby or the best families. We seemingly can’t help ourselves from creating distinctions between ourselves. And while distinctions on their own are not problematic--indeed, diversity creates stronger communities--the valuing of one aspect of life over another does create a problem. It was true in Jesus’ day. It is true in ours. Indeed, it continues. The racist social media posts toward the tennis star Sloane Stephens while she plays at the U.S. Open is just another disgusting reminder of how difference is used to degrade.

Thus the encounter between Jesus and the Syrophonecian woman is a testament to just the opposite of harmful discrimination. The story underscores the universality of God’s grace and love. No one is outside the boundaries of God’s mercy. No one. The fact that Jesus may have been initially closed off to this notwithstanding, the power of the encounter is that Jesus has an epiphany. He sees in a new and fuller way. He is moved by the courage and determination and honesty of the woman. He is opened to compassion in yet another way and that moves him to act. Jesus embodies compassion expressed in healing. But before he does, he also embodies the journey to recognize a myopic and limited worldview and to be open to change and living in a larger and more expansive worldview. It is a model that we all should seek to replicate. Responding in compassion toward the world and always recognizing that we may need to be open to seeing that world in a new and fuller way. Jesus’ model that makes the world better. It makes the world more just and fair. It makes the world more compassionate. And, ultimately, it makes the world more into the image of God.