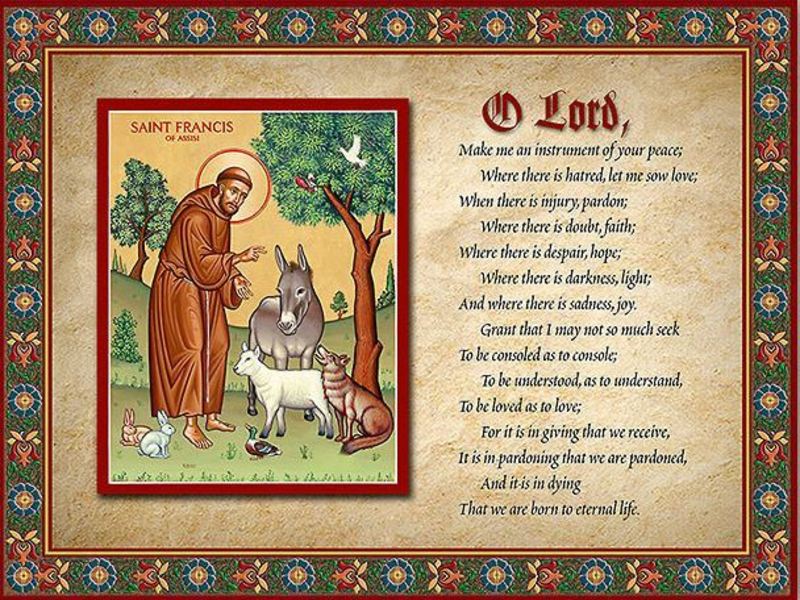 This Sunday is Pentecost Nineteen. We will have green Sundays for two more months and then it will be time to get ready for the mystery of Christmas.

This week we have the story of St Francis of Assisi. We celebrate his feast in October. And he is the patron saint of our parish. And we have many story books of Saint Francis in our classroom.   The church remembers saints because they are people who loved God and others very well.   Next week we will be back to the Old Testament, the people of God and the desert.   Have a good week. Be safe. I miss you.

Francis was born a long time ago in Assisi, Italy, over eight hundred years ago. He was born into a very rich family, and he had more wealth than he needed.   As a young man he was silly. He partied, joked, sang songs and had fun with his friends. He wanted fame and glory. He became a soldier.

He went to war and he was taken prisoner. He was sick and sad, but he told stories and sang songs to the other prisoners to make them feel better. When he was rescued and back home, Francis came so close to God and God came so close to Francis that, he heard God tell him to give up all his riches and take care of the poor, the sick and the lonely.   He told stories about God’s love and Francis himself loved all of God’s creation. Soon others joined him, and they gave up their riches to help care for the poor and the lonely.

One Christmas Eve, he made the Christmas scene for the townspeople, so they could understand the story of Jesus’ birth. He made a real manger with Mary and Joseph, the baby Jesus, the shepherds and all the animals.

St Francis was a friend to animals and one time when a wolf was frightening the people in the village of Gubbio and eating their livestock, Francis spoke to the wolf , “Brother Wolf, you have frightened these people and eaten their animals, but you only did so because you were hungry. Will you promise to make peace with them and do them no harm if they will feed you every day?” The wolf bowed its head and put its paw in Francis’ hand, and from that day on it lived peacefully in Gubbio, and the townspeople fed it like a pet.

By the end of his life Francis had traveled far and wide telling people about God’s love and taking care of the poor. We remember him because he gave up his riches to help and serve the poor.