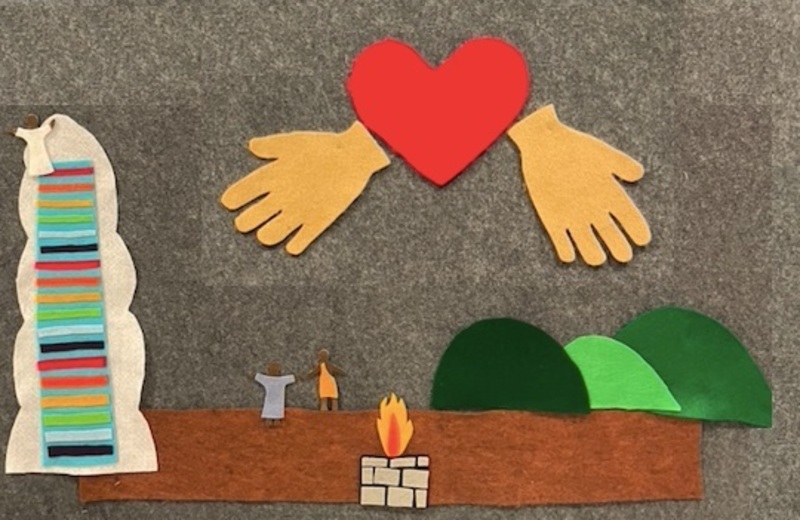 This Sunday is Pentecost Twenty-one and the color is still green.

Jacob uses some trickery to get his way. He must leave home, but God finds him and stays with him. And Jacob becomes the father of twelve sons. These twelve sons are the twelve tribes of Israel, the People of the Promise.

I want to thank Gretchen Wolff Pritchard for her wonderful Beulah Land stories.

They lived in the land of Canaan, as God had promised to Abraham and Sarah: and twin sons, Esau and Jacob, were born to them.

Esau, the firstborn, was a hunter, strong and swift and rough-skinned.  But Jacob was smooth and clever and stayed at home in the tent.

Now when Isaac was old, and his eyes had grown dim, he said to his elder son Esau, “Hunt me some game, and prepare it, and I will eat it and bless you before I die.”

But while Esau was out hunting, Jacob put on Esau’s clothes, and the hairy skins of animals to cover his smooth hands and neck, and he brought his father food. He tricked his father, and his father gave him the blessing instead of Esau. Esau was filled with anger because Jacob had stolen his  blessing, and Esau plotted to kill his brother.  But Jacob escaped, and left home, and journey through the desert.  As he journeyed, he slept in a certain place with a stone beneath his head as a pillow.  And dreamed he saw a ladder to heaven, with angels of God going up and down it.

The Lord stood above it and said to him, “I am the Lord, the God of Abraham and Isaac. I will give you this land on which you lie, and I will bless you and make you a great nation. more in number than the stars in the sky, or the sands in the desert. I am with you wherever you go. I will not leave you.”

When Jacob awoke, he said, “Surely the Lord is in this place, and I did not know it.”  Jacob set up the stone on which he slept as a monument.  And Jacob built an altar to the Lord, and called the place Bethel, which means, House of God.   Jacob married, and had many children, and grew rich in the land to which he traveled.

After many years, he set out to return to his own land. But he stilled feared the anger of his brother Esau.  Jacob camped near the place where Esau was.   And an angel came into Jacob’s camp and wrested with him till break of day.  In the morning, the angel said to Jacob, “Your name shall no longer be Jacob, but Israel, for you have wrestled with God.”  And Jacob looked up and saw Esau coming near.  Jacob ran to meet him., and kissed him, and they wept.

So Esau and Jacob made peace with each other, and Jacob built an altar to the Lord at Shechem.  And that’s our story.