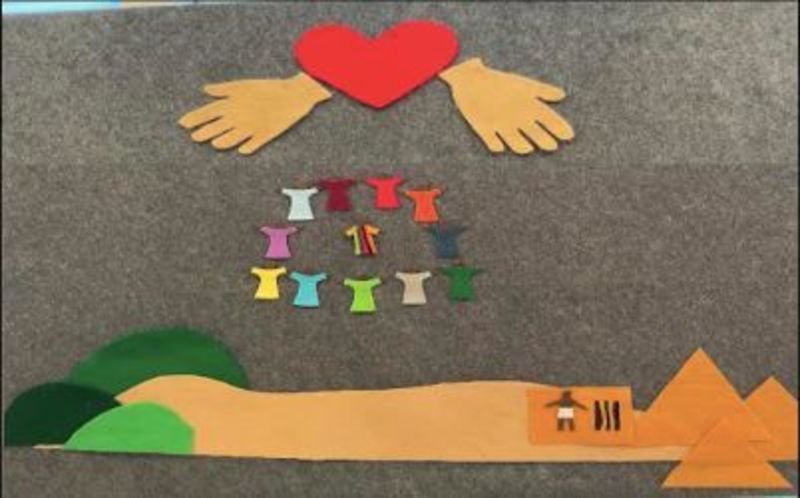 Do you remember how God chose Abraham, Isaac, and Jacob to be the ancestors of the people of Israel? They lived in the land of Canaan, as God had promised to Abraham and Sarah. Jacob was the father of twelve sons: Rueben, Simeon, Levi, Judah, Cad, Asher, Dan, Naphtali, Zebulon. Issachar, Joseph, and Benjamin.

Jacob loved all his sons, but Joseph was his favorite. He made him a beautiful robe to wear, a coat of many colors. None of Jacob’s other sons had a coat like that, only Joseph. And that made his brothers jealous. Joseph had a dream. He dreamed that all his brothers were bowing down to him. He told his brothers his dream. Do you think they liked that dream? “NO!”

The brothers said to each other, “Let’s get rid of this dreamer.” So, they grabbed him and threw him in a pit. They put blood on his coat and took it to their father and said. “Look what happened to Joseph: some wild animal must have eaten him.” Some traders came by. And they took Joseph out of the pit, tied him up and took him far away and sold him in the land of Egypt to be a slave. Joseph was a slave in Egypt. He could not run away. He did not know how to get back to the land of Canaan. No one in his family knew where he was. They all thought he was dead.

One day, he was talking with two other prisoners. They were slaves, too. Their master was Pharaoh, the King of Egypt. The prisoners were talking about their dreams and Joseph told them what their dreams meant. And in three days, everything Joseph said had come true. But Joseph was still in jail. A long time went by. No one remembered Joseph. No one cared about him.

But Joseph wasn’t alone, God was with him. And that’s our story.

This Sunday is Pentecost Twenty-two and the color is green. We are still in the long green growing season.

The story of Joseph is important because it tells us how the people of God, the People of the Promise were living in Egypt. And it also reminds us that no matter how alone we are or how afraid we are, God is with us always.

Have a good week. Be safe. I miss you! I want to thank Gretchen Wolff Pritchard for her wonderful Beulah Land stories and felt designs.