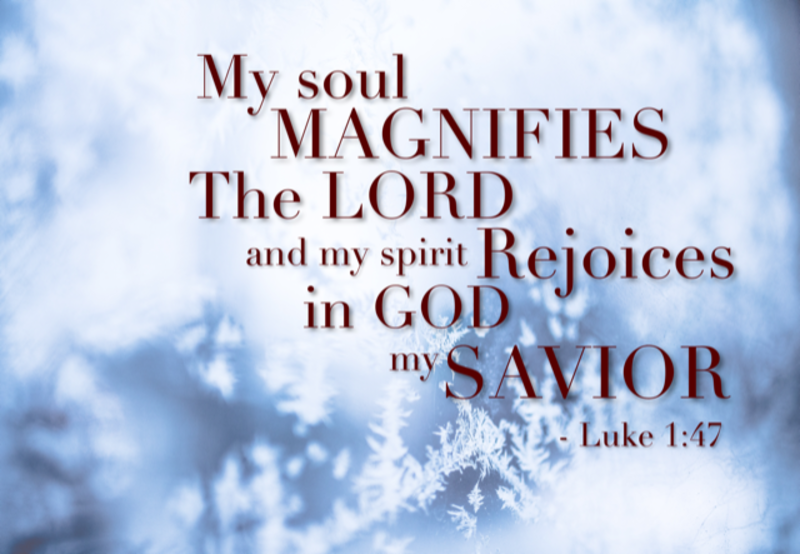 Author and theologian, Diana Butler-Bass, grew up with a father who was a florist. She comments on how little she would see her father between Thanksgiving and Christmas, given the demand for his business at that time of year. As she grew older, however, Butler-Bass was able to spend more time with her father during this season. She would help him design, set up, and dress the trees for a number of families in their community. Every year he would create new themes for the Christmas trees of patrons and adorn them with lights, ornaments, and bows, creating a coniferous masterpiece for each family.

And our worship texts during this season also elicit memories. The prophets envision a world filled with the justice and mercy of God. John the Baptist prepares the way of the Lord and calls us to the same. And today we have, perhaps, one of the most beautiful declarations in all of scripture. Mary’s Magnificat. “My soul magnifies the Lord,” the words flow from Mary’s mouth in today’s gospel lesson as pure adoration. We hear these words following Mary’s encounter with Elizabeth and nod approvingly or wish that we might be so inspired to echo the same sentiments. My soul magnifies the Lord! And more, “my spirit rejoices in God my Savior.” Amen. Preach it, Mary! Sitting on the cusp of one of the most sentimental celebrations within the Church year and the larger culture, it is easy to allow these words to wash over us without a sense of irony or concern. Of course, God is to be praised. Mary is our model of the godly life.

Our memory, however, may be a bit hazy or dimmed. What we often fail to recognize is the offense and vexation that Mary’s Magnificat creates. With sentimental creche scenes ubiquitous at this time of year, it is easy to forget that the “mother” of our Lord was probably only 13 or 14 years of age as she utters these words. Literally, out of the mouth of babes! Further, the words that follow should cause us all to reassess how much we really want to hear these words. Listen:

My soul magnifies the Lord, for. . . God has shown strength with his arm;   God has scattered the proud in the thoughts of their hearts. God has brought down the powerful from their thrones, and lifted up the lowly;   God has filled the hungry with good things,   and sent the rich away empty.

Far from some teenage naivete about secret santas or what not, these words strike at the very foundations of the world that Mary lived in and the world we live in. These words have been roundly rejected by those in power throughout the ages. The Caesars executed those who spoke them. The emperors tortured those who espoused such visions. The oligarchs try to depose or poison those who utter such nonsense. Why, even the Roman Catholic Church opposed Mary’s statement. Her Magnificat, in part, inspired what we refer to as Liberation Theology: the powerful brought down, the lowly brought up, and the hungry filled. Liberation Theology was what the Vatican’s Congregation for the Doctrine of the Faithful outlawed as too radical. To some, this may sound a whole lot like socialism more than religion. Certainly it is a word of hope for the majority of people in the world, unless you are the one with the power. And we are the ones with the power.

When we understand this reality, we may want to adopt the position that, “Children should be seen, not heard,” rather than embrace the radical and revolutionary sentiments of Mary. Yet, we should not be surprised. This is the nature of the God that meets us throughout the scriptures. Wild, uncontrollable, passionate, advocating for the marginalized and poor, and fed up with our human capacity to put on airs, lord it over others, and become a bit too infatuated with ourselves. The status quo is not God’s vision. A new heaven and a new earth is. One where equity abounds and abundance overflows that none are in need and all are satisfied.

While Mary’s song can be read through this judgmental lens, it also inspired, as Charles Cambpell notes, the Feast of Fools. This is the name given to part of the Christmas revelry that were celebrated for centuries throughout the church. In fact, the Feast of Fools became a literal acting out of the Magnificat. The Feast of Fools subverted the pretensions and hierarchy of both the church and the society: Throughout medieval and early modern Europe, Christmas was a time for festive reversals of status. As early as the ninth century, a mock patriarch was elected in Constantinople, burlesquing the Eucharist and riding through the city streets on an ass. And as late as 1685, in the Franciscan church of Antibes, lay brothers and servants “put on the vestments inside out, held the books upside down,… wore spectacles with rounds of orange peel instead of glasses,… blew the ashes from the censers on each other’s face and hands, and instead of the proper liturgy chanted confused and inarticulate gibberish.” Cross-dressing, masking as animals, wafting foul-smelling incense, and electing burlesque bishops, popes, and patriarchs mocked conventional human pretensions. The reversal of the Magnificat was literally embodied in the liturgy. Oh, that we might find ways to do the same not just in worship but in life.

Indeed, given the past year, we might be given over to some of these same activities. We have come up against the limits of our pretensions. Amidst the seriousness of life, we also need outlets for foolish and farcical release. Nevertheless, both the literal reading of Mary’s words and the Feast of Fools interpretation are important for us. One reminds us of our accountability one to another and God’s preferential option for the poor. The other reminds us that we abound in absurdity, and God meets us right there as well, while also moving us to that redemptive end. Human pretensions are to be challenged and mocked. Delusions of grandeur are to be leveled and an opportunity for frivolity. And the seriousness of the world must never squelch the wonder of human satire. Let’s not forget that. Or, as Diana Butler-Bass would know it is one of the memories to hold onto.