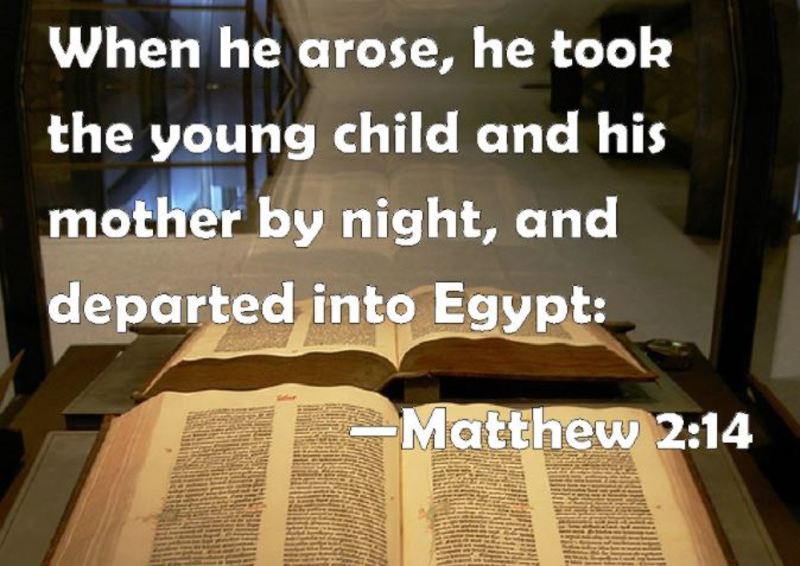 A reading from Matthew 2: Now after they had left, an angel of the Lord appeared to Joseph in a dream and said, “Get up, take the child and his mother, and flee to Egypt, and remain there until I tell you; for Herod is about to search for the child, to destroy him.” 14Then Joseph got up, took the child and his mother by night, and went to Egypt, 15and remained there until the death of Herod. This was to fulfill what had been spoken by the Lord through the prophet, “Out of Egypt I have called my son.”

16When Herod saw that he had been tricked by the wise men, he was infuriated, and he sent and killed all the children in and around Bethlehem who were two years old or under, according to the time that he had learned from the wise men. 17Then was fulfilled what had been spoken through the prophet Jeremiah: 18“A voice was heard in Ramah, wailing and loud lamentation, Rachel weeping for her children.

Regardless of what you think about the former Secretary of Defense under George W. Bush, Donald Rumsfeld, his verbal gymnastics concerning entry into the Iraq War have lived on in infamy. If the reality he described wasn’t so tragic, the truth of his comments would be easy fodder for late night comedians. Again, Rumsfeld’s words were tragic, and they were also prescient. He noted:

Ironically, the days immediately following Christmas may be the fitting example we didn’t know that we didn’t know about. Most people observe Christmas, and then it is on to preparing for whatever the New Year may bring. However, in the church calendar, there are three days that immediately follow Christmas, and they offer what many would interpret as a challenging perspective--if not a downright disturbing one--regarding the incarnation. After the angels go back into heaven, after the shepherds return to their sheep, after Mary and Joseph get on with raising a child, and after the presents have been opened and the wrapping paper discarded, the church observes the feasts days of St. Stephen, The Holy Innocents, and St. John. Probably not top on everyone’s list.

These are curious observances, because they are all martyrs. St. Stephen is the first apostle killed for his beliefs. The book of Acts describes his stoning at the hands of a mob. Holy Innocents commemorates the narrative in Matthew where King Herod kills the first born boys in Bethlehem for fear of a “new king” who was born there. And while John the evangelist was not an actual martyr, he did serve time in jail for his beliefs and would most assuredly have died for those commitments. Did you know this? Or is this one of those unknown unknowns? Regardless, it is striking that immediately following one of the great feast days of the church year and a festival known for the promise of God’s life and light breaking into the darkness, the church immediately returns to a focus on death. Why?

On the one hand, this was the reality of the early church and one that we, perhaps, gloss over or fail to appreciate fully. The early church was marginalized, persecuted in places, and not the center of power. Indeed, as Marcus Borg notes, the church’s language literally betrayed its outsider status and challenge to the Roman power of that time. Borg writes:   Roman imperial theology is the oppositional context for much of early Christian language about Jesus. The gospels, Paul’s letters, and the other New Testament writings use the language of imperial theology, but apply it to Jesus. Jesus is the “Son of God” — the emperor is not. Jesus is the “Lord” — the emperor is not. Jesus is the “Savior” who brings “peace on earth” — the emperor is not.

Or to put it another way, language matters, and it possesses importance for how we see the world and how we engage the world. Borg’s insight is, perhaps, another one of the unknown unknowns. We know that Jesus was a product of the first century. However, we easily use the language of “Son of God,” “Lord,” and “Savior,” without any of the irony or subversion that it would have elicited in the first century. To us, Jesus is all those things, and he represents the power of those positions. Positions that we unknowingly assume are meant to express the rightness of our belief.

The implications of this may also create another unknown unknown scenario. There is a move in some theological circles to move away from the kingly language, namely Kingdom, when speaking of God and Jesus. While the language would have been appropriately subversive in the first century--ala Borg--the language implies domination and superiority at best and oppression and tyranny at worst. Not the heart or nature of the divine. Rather, it expresses the illusion and desire of humans seeking control and power. The common corrective for Kingdom has been to refer to the Kin-dom of God. That is, God in relationship with creation and all creatures. Family, equity, connection, a horizontal way of relating, not a vertical paradigm. Yet, even this sensible reordering of things for seemingly all the right reasons has been met with staunch resistance and the argument for maintaining tradition.   I say all of this as a way to consider the text that was read at the beginning of this   sermon--Herod’s purported killing of the Holy Innocents in Bethlehem--and as a way to reflect on our lives and our life together through that lens of humility and compassion, not power and might.   In a timely Atlantic essay entitled, The Challenge of the Manger, David French writes:

The American Church sits in a strange and uncertain place in our national life. It still possesses immense power and wealth, yet its numbers are declining and it feels under siege. But it’s a “siege” that few of the world’s believers would recognize as a crisis. American Christians want liberty and prosperity and respect. That’s understandable. It’s deeply human. It’s even deeply American—but it’s not distinctly Christian. That is not the promised path. Instead, the way of Christ is the way of the cross. He does not promise power or respect or prosperity. “If anyone would come after me,” Christ said, “let him deny himself and take up his cross and follow me.” . . . The manger and the cross remind us that, to transform this world, Christians don’t need a Caesar, or a president. To reject the will to power is not to forsake justice or to neglect mercy. It’s to follow the son of God himself and to recognize that his ways are not our ways, and his wisdom is not our wisdom—to trust him even (and especially) when the world feels strong, and we feel weak. This Christmas, Christians should remember the most ancient of lessons. In a time of fear and uncertainty, our desperate desire for a leader who fights should not cause us to miss the Christ who died.   Indeed, as we enter into this new year with so much of the fear and uncertainty that French references, may we abide by the known known that is Jesus. His life, his ministry, his death, and his resurrection as an invitation to model the same. To give graciously. To love fully. To sacrifice for the life of others. To humbly serve in the knowledge that it is not we who act, but it is Christ alive within us who guides us. The unknown becomes the known. We may not become more powerful or richer or more dominant. We will, however, be more faithful.