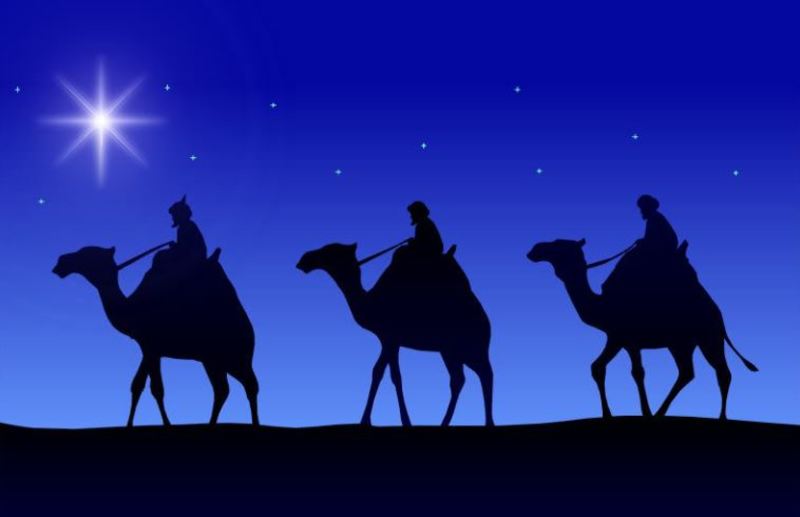 Feast of the Epiphany

The famous story is told of a local tyrant contracting with the ancient Greek mathematician Archimedes to detect fraud in the manufacture of a golden crown. The tyrant suspected his goldsmith of leaving out some measure of gold and replacing it with silver in a wreath dedicated to the gods. During a trip to the public baths, Archimedes realizes that the more his body sinks into the water, the more water is displaced--making the displaced water an exact measure of his volume. Because gold weighs more than silver, he reasons that a crown mixed with silver would have to be bulkier to reach the same weight as one composed only of gold; therefore it would displace more water than its pure gold counterpart. Realizing he has hit upon a solution, the young Greek math whiz leaps out of the bath and rushes home naked crying "Eureka! Eureka!" Or, translated: "I've found it! I've found it!"

While we hope that no one runs home naked today, the classic story of Archimedes--and his cry, “Eureka!”--is a perfect example of what we mean by Epiphany. I’ve found it. I’ve found it. Or, to literally translate the Greek word Epiphany: manifestation or revelation. I suspect that we all have moments of awareness or realization that moves us like Archimedes. The curtain of whatever conundrum or question we are dealing with is pulled back, and we see more clearly or possess more clarity on what we are to do. Whether it is a relationship or what we should do with work or what exactly we want to do with the rest of our life, those moments of insight and understanding are priceless.

With regard to the Christian calendar and this season of Epiphany, the natural question is, “What exactly has been found? Manifested? Revealed?” Well, within this season, the focus is on aspects of the divine revealed in the person Jesus. The story for the Feast of the Epiphany (January 6 or this past Thursday) is that which we just heard: the Wise Men who visit the infant Jesus, present him with gifts of gold, frankincense, and myrrh, and return home by another way after being warned not to return to Herod. This Sunday is also the first Sunday after the Epiphany. It’s text is the baptism of Jesus by John in the Jordan. The memorable moment in the baptismal narrative is Jesus’ emergence from the water and the voice of God declaring, “You are my son, the Beloved. With you, I am well pleased.” Thus, we have two familiar stories that manifest or reveal aspects of the Holy that we do well to reflect upon.

So, let me offer some reflections on the story of the Wise Men and Jesus’ Baptism. What is it that is manifest for us regarding God? What is revealed? Let’s focus on the following three details:

1. The Wise Men’s story is really about the expansion of the family of God

2. The Wise Men’s story is also about the reality of evil in the world

To begin, the Wise Men’s story is really about the expansion of the family of God. From the very beginning of the Christian tradition, the question existed as to who was a part of the community? Only Jews? Others? If so, who? And how? Part of the beauty of the Wise Men’s narrative sitting in the second chapter of Matthew is that it reveals from the very beginning that God is up to something that transcends the covenant with Moses. The Wise Men were probably astrologers, at best, or religious quacks, at worst. Their presence and homage alert us to the fact that God is up to something new. Not just the original community. Now all people are welcome into this family of God. These foreigners are among the first to recognize the Holy who resides in the infant Jesus. Thus, this story should constantly prod us to consider the parameters that we create and, perhaps, the boundaries we develop regarding who is in and who is out. We should also recognize that our parameters may very well limit what God is about. Indeed, what is revealed about God in this story is that God welcomes everyone.

While everyone is welcome, not everyone desires to play. Indeed, the presence of God in the midst of the world creates clear distress on the part of those in power. In this case, Herod. The Wise Men return home by another way, being warned in a dream not to return to Herod and divulge the whereabouts of the Christ child. Thus, incarnation is not about the alleviation of the difficulties of life. Rather, the fact that the forces of empire and power seek to destroy the infant Jesus is a reminder to us of God’s presence to us in the midst of life, with all its beauty and wonder as well as its struggle and suffering. That is what Emmanuel means. God with us. Not, God taking away all the problems. Rather, God present with and for us in the midst of the difficulties, and God intimately aware of and familiar with those things that we wrestle with.

Finally, David Brooks tells a wonderful story of a pastor, Jimmy Durrell, in Waco, TX. He wanted to help the homeless in his community, but they would not darken the door of the church. So, Jimmy brought the church to where the homeless were under an overpass. He created what was called The Church under the Bridge. He is a beautiful soul. Brooks referred to him as an example of what we, as humans, feel when we see an act of goodness. We are filled with moral admiration. We recognize that we are witnessing something beautiful. Brooks, however, continues his story. One day he was in Waco, and he had breakfast with LaRue Dorsey. She was a tough teacher. A disciplinarian. She reminded Brooks of a Marine Drill Sergeant. While they were eating, Jimmy came into the cafe. He and Larue were good friends. Jimmy calls out, “Mrs. Dorsey! Mrs. Dorsey! You’re the best! You’re the best! I love you! I love you!” Brooks describes how this disciplinarian, Mrs. Dorsey, is transformed and becomes like a 9 year old girl with a wide smile across her face.

Hearing the story of the baptism of Jesus and thinking about the words, “You are my beloved. With you, I am well pleased,” the image of Mrs. Dorsey seems so apt. That is what God says to her and to each of us. You’re the best. You’re the best. I love you! I love you! If we can hear this amidst all the other voices vying for our attention, how much better is the world we live in and the life we live? Indeed, if you hear that declaration, who wouldn’t have a broad smile beam across his or her face?

Think of Epiphany as the Christian Eureka. We’ve found it. We’ve found it. Or better yet, what is revealed to us, made manifest, is that we have been found. Found. Loved. And freed. The Sundays that follow are stories that reveal further manifestations of the God who finds us, loves us, and frees us in the person of Jesus. Come and listen.   I close with this beautiful poem by Malcolm Guite:

Epiphany On The Jordan

Beginning here we glimpse the Three-in-one;

The river runs, the clouds are torn apart,

The Father speaks, the Sprit and the Son

Reveal to us the single loving heart

That beats behind the being of all things

And calls and keeps and kindles us to light.

The dove descends, the spirit soars and sings

‘You are belovèd, you are my delight!’

In that quick light and life, as water spills

The voice that made the universe reveals

The God in Man who makes it new again.

He calls us too, to step into that river

To die and rise and live and love forever.