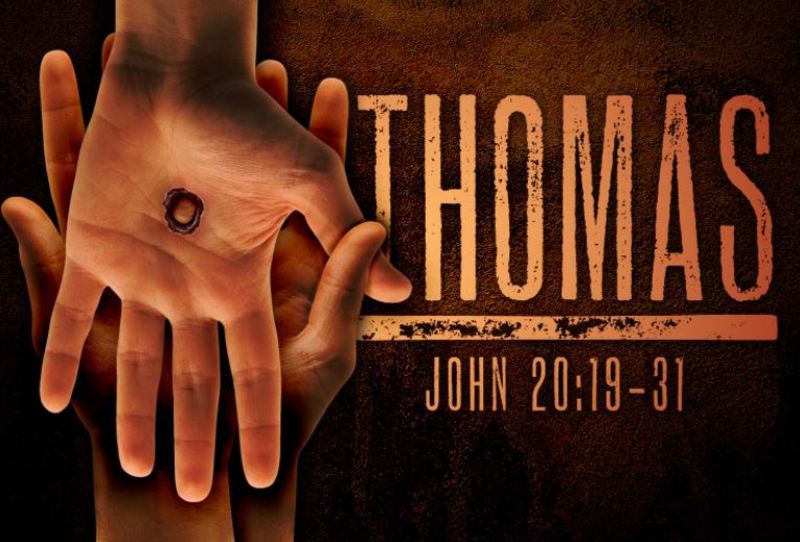 Can you believe that it is only the second week of Easter, and our Gospel reading is all about doubt?! On Easter Sunday, just last week, we shouted our “Alleluias” to the rooftops and now, already, here we are along with Thomas, the disciple thinking it might be “too good to be true.” Yes, doubt has begun to emerge even among the disciples once the news of Jesus’ miraculous appearances gets out. Why do we doubt and what does this say about us as people of faith? What happens to our faith when our dark night of the soul takes place?

When I was in seminary at Yale Divinity School, one fellow seminarian described his first year at YDS as a time when his heart fell out of his chest and broke into piece when he was taught things in his scripture classes that contradicted what he had believed his whole life. It is not surprising that most bible studies in churches do not focus upon the many contradictions of the bible. One really needs to be paying attention in church to remember that there are three different accounts of who showed up at the tomb: one says, one Mary, another says two Mary’s and a third says two Mary’s and a Salome. Likewise, the story about who is inside the tomb is unclear as well: Mathew and Mark say one angel and Luke and John say two. There are two stories of creation and two different accounts of Moses going up to get the 10 Commandments. What really starts to worry a new seminarian who has never questioned the veracity of the bible is when he or she is required to read something called Old Testaments Parallels and there one discovers that a lot of the major stories in the bible – creation, the flood – had been legends in other faith groups – years before they supposedly were meant to have happened in the Hebrew Bible. Then there are the list of rules to followed in Leviticus – Did God really want us to kill someone for wearing clothing of different materials, and what about all those references to slaves? Old Testament scholars will admit that there is little factual support for much of what happened to the people of Israel in the bible, nor do they even know where they actually lived, beyond some general migration patterns. It is debatable whether they ever were in Egypt much less crossed over the parted Red Sea. Many of these doubts are also cast at the historical Jesus as well. Such new knowledge about the bible can and does cast doubt in many people’s minds.

Then there are other more personal reasons that people experience doubt and question their faith. The theologian Henri Nouwen said:

Here I was flat on the ground and in total darkness. What had happened?  I had come face to face with my nothingness. It was as if all that had given my life meaning had been pulled away and I could see nothing in front of me except a bottomless abyss. I felt that God had abandoned me. It was as if the house that I finally found had no floors. The anguish had completely paralyzed me and all had become darkness. (ILV viii – ix)1

In Nouwen’s case it was a relationship which faltered that devastated him, for others it might be losing a loved one in a tragic accident, or it might be even be me, the chaplain, who when confronted with many horrendous events at the hospital, particularly during the pandemic, starts to ask hard questions such as the meaning of suffering, and why do bad things happen to good and innocent children and people. And this biggest of all questions is something that all of us will confront at some point in our lives.

When acclaimed Old Testament Scholar Professor Bart D. Ehrman researched the subject of theodicy, or the theological inquiry into why God allows people to suffer, his doubts about the existence of an adequate answer resulted in his loss of faith altogether! His book called: “God’s Problem: How the Bible Fails to Answer Our Most Important Question: Why We Suffer” describes research scholarship on this subject as well as his personal journey from an Episcopalian to a born-again evangelical, back to a liberal Episcopalian, and then finally becoming an agnostic atheist. Interestingly, it was his own biblical research that caused his doubts and faith transitions. And then there are people like Mother Theresa who just lose their faith for no identifiable reason, and then soldier on hoping it might return in the same way that it left.

Chaplains are often called to bedsides of patients or family members who are struggling to make sense out of what has happened to them. Often, we hear things like, “Why has God done this to me” or “What have I done to make God punish me like this.” Rage against the illness or injury often is then turned towards God, and creeping doubts can easily lead to a crisis of faith. You might remember a time when you had your own doubts. Was it around some event in your life? Was it because of some realization about the bible and its different versions of the same events or perhaps same aspect of scripture that you just could not buy or accept? Or was it just because you just had some vague feeling that life’s meaning eluded you and that God wasn’t going to pick up the phone when you called or sent a text message. Yes, doubt, happens to most of us at some point in our spiritual journey.

So, the question is not really do you have doubts, as it is inevitable for us to use our God given brains to question things that do not seem to fit they way they should, but what to do when you have doubts, doubts strong enough to perhaps prompt a so-called dark night of the soul. In our Gospel reading today, we see that even Thomas, a disciple had doubts, and that Jesus understood that to be a normal part of who we are as humans. Jesus appeared to Thomas who then went from Doubting Thomas to Thomas the believer and showed Thomas that the story at the empty tomb continued and was real. At both of Jesus’ appearances he welcomed them with the words “peace be with you.” – Jesus tells Thomas: “Do not doubt but believe.” Looking forward to a time when he would no longer be on earth, Jesus says that “blessed are those who have not seen yet who come to believe.” Many people have reported that the times in their lives when they have suffered, times when they have questioned themselves and God, have also had the result of making their faith stronger, and improved their ability to handle new challenges in the future.

According to Henri Nouwen’s biographer, Will Hernandez: “… Henri Nouwen came out of his encounter with the dark night of the soul with a far greater motivation to love more deeply.” “He was able to look back at that period of his life and see it as a time of intense purification and this led him gradually to a new inner freedom, a new hope, and a new creativity. (IVL:xviii; 59-60). 2 Nouwen believed that just as “Jesus’ wounds remain visible in his risen body… our wounds are not taken away, and become a source of hope to others (RD:163).” “If one is to truly care for others’ wellbeing “one must offer one’s own vulnerable self to others as a source of healing.”3 From this came Nouwen’s description of the wounded healer those whose own wounds are precisely that which allow him or her to have compassion, empathy and the ability to connect with another. So then – blessed are those who doubt for they may like Thomas come to say: “My Lord and my God.” Doubts are a natural process of making meaning, something that God, above all, wants us to do. Use your moments of doubts to reconnect to what you do truly believe. Use your moments of doubts to rail against injustice or to rail against God – God can take it. It has been said that: doubt makes the mountain which faith can move. So, when in doubt – doubt. Amen