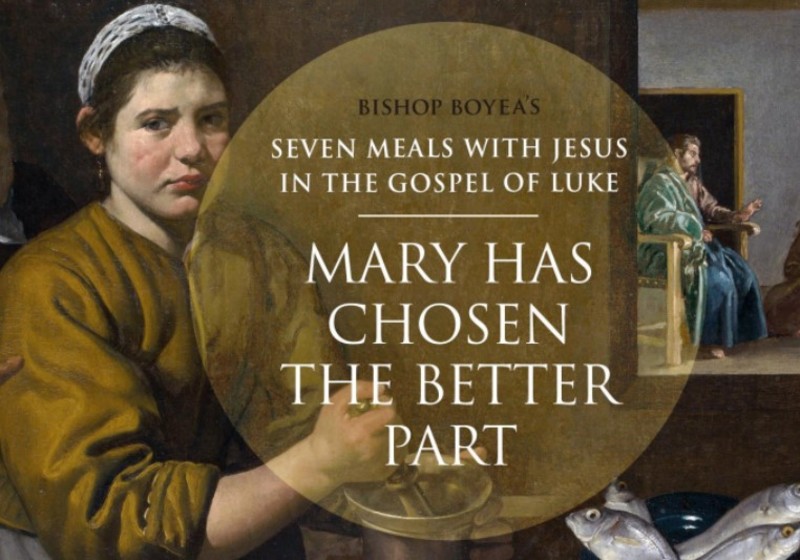 Today’s Gospel is a very familiar story that allows us to make assumptions not supported by the text. Regrettably, it has suffered from dubious interpretations, with Martha becoming the poster child for all that is wrong with the life of busyness and distraction, often seen as inferior to the perfect life of contemplation. It has been used as justification for the argument that women need to do women’s work, and it has been held up as an example of how Jesus treated women just as he treated men, with full equality.

As the story goes, When Jesus comes to Bethany, Martha demonstrates hospitality by welcoming Jesus into the home she shares with her sister Mary and immediately busies herself with the tasks of serving their guests. Although we are not told precisely what those tasks are, a good guess is that she began preparing a meal.

We are also not told whether their visit was anticipated or if they had simply shown up at the door. We are also not told if Jesus’ entourage included the seventy-two whom he had sent ahead of him to every town and village where he was about to go.  It is one thing if Jesus and the Twelve showed up at Martha and Mary’s home, but quite a different matter if the seventy other disciples tagged along with Jesus and the Twelve. At any rate, regardless of the number of guests; while Martha, harried, anxious, and doing too many things at once  slaved away in the kitchen to make sure her guests were comfortable and well fed, her sister Mary, instead of assuming the role expected of women in her culture, takes her place at the feet of Jesus, the posture of a student learning at the feet of a rabbi.

Many who read or hear this story may cheer for Mary in her transposal of traditional roles, a radically counter-cultural violation: that an unmarried woman would sit at the feet of a single man—a rabbi, no less—and be instructed in religious teachings– contrary to the teaching of second century Jewish scholar, Rabbi Eliezer ben Hyrcanus who once said, “The words of the Torah should be burned rather than entrusted to women.” Mary doesn’t utter a single word in this story. She is doing one thing and one thing only. She is listening to Jesus teach, seated at his feet like the other disciples, which in first century Palestine, just wasn’t done because it was not appropriate for a woman to assume the place of a religious disciple, which was a privilege reserved only for men.

There are, of course, those of us who empathize with Martha. Her sister leaving her to do all the work may not have been the only thing that made her anxious. Surely, she knew that inviting a man into their home, serving him dinner, and engaging in deep conversation with him was extremely taboo and that the consequences could be severe. What would the neighbors think? And added to this was Martha’s focus on ensuring her guests were well taken care of. She is well aware that fixing dinner is pretty mundane but very necessary work, and somebody’s got to do it. After all, food doesn’t just prepare itself, and there would be no one to prepare dinner if everyone was just sitting at Jesus’ feet.

It is not difficult to imagine because we likely have had the same experience, running around, doing things that seem really important to us, while someone else does nothing. It can make us angry and resentful. It is easy to understand how Martha was feeling; seeing the person whom she expected to help her sitting at Jesus feet, listening to what He was teaching, completely unaware of how frazzled she was trying to get the meal together.

This pleasant story takes a sharp turn when Martha, could take it no more. She comes to Jesus and asks, “Lord, do you not care that my sister has left me to do all the work by myself? Tell her then to help me”(Luke 10:40).

In our culture of hectic schedules and the relentless pursuit of productivity, we, sometimes get so busy that we can’t even think straight. We feel as if we are being pulled in many different directions. We become worried and distracted by many things, and even though we know that worrying does no good, and that much of what we worry about is not so important in the larger scheme of things, yet we cannot seem to quell our anxious thoughts and frantic activity. We get so caught up in putting out fires and dealing with emergencies, there’s just no time left for the really important things like spending time with family, or taking care of our own needs, or even spending quality time with Jesus. And like Martha,  we let our worries become our focus and allow the urgent to overtake the important.

It is true that much of our busyness and distraction stem from the noblest of intentions. We want to provide for our families, we want to give our children every opportunity we can to enrich their lives and prepare them for the future. We want to serve our neighbors and we want to serve God, but if all our activities leave us with no time to be still in the Lord’s presence and hear His word, we too are likely to end up anxious and troubled.

The proximity of this text to that of the Good Samaritan, the man who showed compassion and hospitality tells us that this text is about hospitality, which reminds of the story about a student, who was working as a volunteer alongside a Jesuit priest in a home for the poor. They worked all day, every day, handing out food, ministering to human needs as best they could. At the end of a particularly long, difficult day they took care of the last person and were closing the door for the night when they looked out and saw yet one more person shuffling his way up the sidewalk toward the center. The student looked out at the man slowly walking toward them, thought of how tired he was, and muttered, “Jesus…..” The old Jesuit said, “Could be, could be. “We had better open the door.” The stories that we have heard these two Sundays remind us that we are called to listen to God’s Word and then act on the Word by going to work and doing what is necessary to love God and neighbor. We are taught that it is hearing AND doing, not hearing OR doing that matters. The bottom line is that Jesus cares about our relationships with God and one another. What is a wonderful meal, served with care and grace, if we have to eat it in solitude, without the company of friends and good conversation?

Sometimes, we need to be a little more like Mary instead of  being all caught up with the going and doing, and moving from one thing to the next, trying to be everything to everybody. Slowing our internal pace allows us to be more receptive to God’s still, small voice. It helps us focus our energy and attention in a way that is, in the long run, much more productive and fruitful than the scattershot approach to getting things done. We could accept this as the lesson Jesus is teaching, without going any deeper, and it would do us a world of good. Spiritual writer and priest Richard Rohr reminds us that our prayer life needs to motivate our action; our action needs to be grounded in prayer.

I cannot help but wonder how Luke’s story might end. It may be that, after everyone finished the supper that Martha had prepared, Mary quietly got up and did the dishes, while Martha lingered at the table with Jesus and listened as he spoke. Or, perhaps after supper, Martha returned to the kitchen, followed by Jesus, who picked up a towel  to dry the dishes after she washed them; and she was finally able to hear him speak about the Kingdom of God. Because the story is open ended, it draws us into the story to live out our own lives and write our own ending.

The one thing that we can all be sure of is that Jesus invites all of us who are worried and distracted by many things to sit and rest in his presence, to hear his words of grace and truth, to know that we are loved and valued as children of God, to be renewed in faith and strengthened for service. And in the end, the “one thing” that is needed is to be open to the challenge to play whatever part God has given each of us to play whether we are more inclined to be Martha or Mary. We really don’t have to choose. We just need to serve in the roles to which we are called, and when we do that, and do it faithfully, we discover that it is the better way. Amen