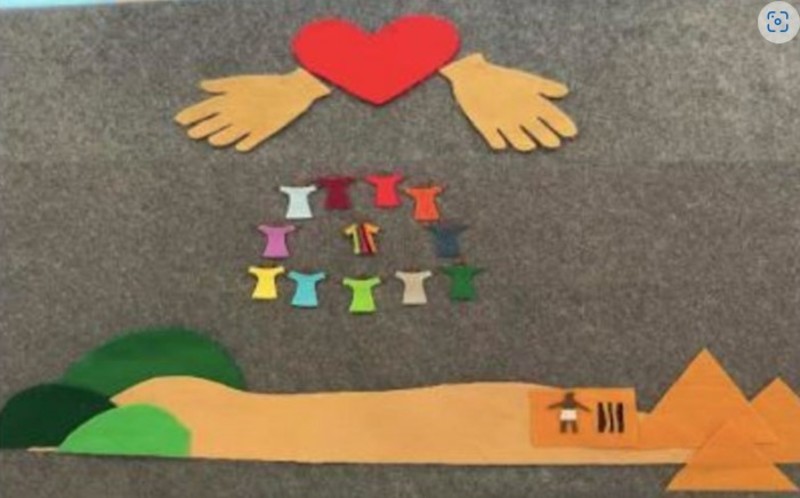 THE STORY OF JOSEPH

The Great Family grew.  Jacob, the son of Isaac, had twelve sons. Jacob’s favorite son was Joseph.  To show his love, Jacob gave Joseph a long-sleeved coat of many colors.  This made Joseph’s brothers jealous and they hated him. One night, Joseph had a dream.  He and his brothers were working in a field gathering wheat.  Suddenly, Joseph’s bundle rose up and all of his brothers’ bundles bowed down before his.  Joseph told his brothers this dream and they hated him even more.

They wondered whether Joseph would rule over them. Joseph had another dream.  In this dream, the sun, the moon and eleven stars bowed down before him.  Joseph told his father and his brothers about this dream, and they became angry.  It sounded like not only the brothers, but also Jacob and his wife would bow down before Joseph. One day the brothers were far away in the fields with the flocks.  Jacob sent Joseph to see how they were doing.  Joseph went to them, and when his brothers saw him coming, they decided to kill him.

But the oldest brother, Reuben, convinced them not to.  Instead, they took his coat and put Joseph in a deep pit.  Soon, a caravan of traders came past.  The brothers sold Joseph to the traders for twenty pieces of silver.  They took Joseph’s coat and dipped it in the blood of a goat and brought the coat to their father.

They told Jacob that a wild beast had killed Joseph, and Jacob wept. Joseph was taken across the desert to Egypt and sold as a slave. A captain of Pharaoh’s army named Potiphar purchased him.  Potiphar’s wife had Joseph sent to jail, but Joseph remained close to God and God to him.  Some of Pharaoh’s servants were in jail with Joseph.  They had dreams and Joseph told them what they meant. When the Pharaoh’s servants were released from jail, they found that the Pharaoh had many dreams that no one understood.  One of them told the Pharaoh about Joseph, and the Pharaoh called for him.

The Pharaoh’s dream had two parts. In the first part there were seven fat cows and seven skinny cows.  The thin cows ate the fat cows

Then he dreamed that there were seven fat and good ears of corn and seven sick and thin ones.  The thin ones swallowed up the good ones.

The Pharaoh agreed and put Joseph in charge of gathering and saving the grain.  Joseph was now thirty years old.   The lands near Egypt also had bad years.  The people from the lands near Egypt came to Joseph to beg for food.  And old Jacob sent ten of his sons into Egypt to get food to eat.  Jacob kept his youngest son, Benjamin home with him.   When the brothers came to Egypt, they bowed down before Joseph.   They did not recognize him, but Joseph knew who they were.  He kept one of the brothers with him and gave the others grain and told them to go home and come back with their younger brother, Benjamin.   When they returned and all the brothers were together, Joseph told them who he was and forgave them.  For Joseph was so close to God that he knew God had a plan.  He said to his brothers, “God sent me before you to preserve life.”   Then Joseph sent for his father Jacob.  And Joseph and his family spent the rest of their days in Egypt. When Jacob died Joseph took him home to be buried in the land of their fathers.

Then Joseph and his brothers returned to Egypt, where years later their children would become slaves because the new Pharaoh forgot all that Joseph did.

Mary and Joseph on the Journey and St. Nicholas

Moses and the Ten Commandments