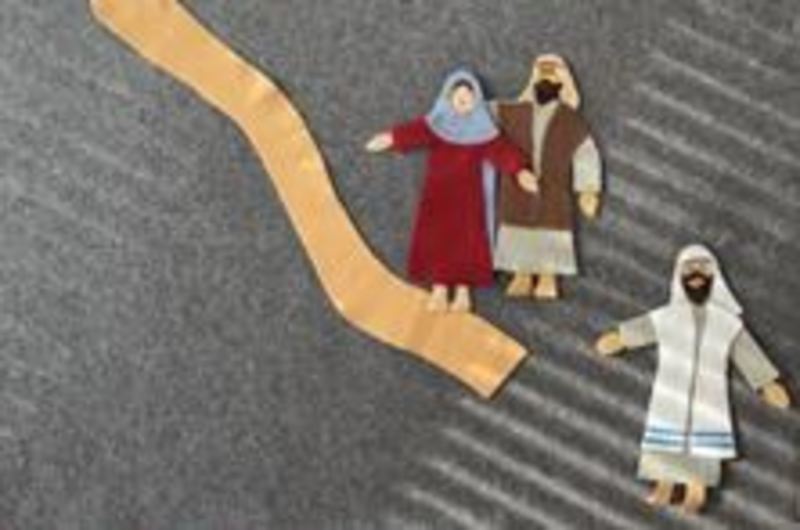 The Lord be with you! This Sunday is the second Sunday of Advent and the color is blue. During Advent we are all on a journey to Bethlehem.

This week Mary and Joseph show us the way to Bethlehem. We have time to slow down and get ready for the Mystery of Christmas. Remember to enjoy the light of the Holy Family. Tuesday, December 6, is the feast of St. Nicholas. Nicholas lived almost 1700 years ago.

We have his story, too.

It was very slow. They must have been the last people coming up the road to Bethlehem that night.

This is the story of Saint Nicholas.  The church remembers him during Advent, the time for getting ready to come close to the Mystery of Christmas.

I wonder why we remember Nicholas? Once there was a little boy whose mother and father died when he was only a child.  He always wanted to give a present to the Christ Child (the baby Jesus).  But the Christ Child lived long before Nicholas was born.  Still he wondered if the Christ Child was living in every child. When Nicholas grew up, he became a priest.  People knew he was a holy person, so they made him their Bishop.

The place where he was Bishop was in Myra, a city in the south of a country we now call Turkey. Nicholas was very shy. When he began to give gifts to children on Christmas Eve, he did it in secret so no one would know. Sometimes the gifts came down the chimney.  Sometimes they were left by the door.

Sometimes they were dropped through an open window.  Nicholas would tiptoe away in the night, leaving the delight of the gift to be enjoyed in the morning. When Nicholas grew older it was hard for him to give gifts on Christmas Eve and even to give the people the holy bread and wine in the church.

The people carried him there so that he could say the service for them. When Nicholas died something amazing happened.  The gifts which people had found in their homes on Christmas Day continued to appear. One day the Emperor of Russia heard this story. He decided to make Nicholas the Patron Saint of Russia.  Far in the north of Russia where there was nothing but snow, yet gifts continued to appear on Christmas Day.

The story traveled westward into Finland, and Sweden, and Norway where reindeer lived. The story continued to spread and came to Holland.

When the Dutch people came to this country, they brought the story with them. Presents began to appear here too, and they still do to this day. This all began with the gifts of the poor Bishop of Myra for the children of his town, because he saw the Christ Child in every child. We remember Nicholas because he gave gifts for God.